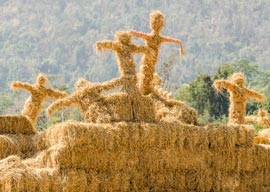 If I could eradicate one sin from the world, I would free writers and journalists from our desire to make a heartfelt splash, and damn the facts. Exaggerated reporting in the service of a hunch is even worse if your hunch has a germ of truth. You”ve now made a straw man of your own idea”and the more attention you get with your hollering, the more damage you”ve done.

Last month, on the heels of the Charlie Hebdo shootings in Paris, security expert Nolan Peterson led Fox News on an unfortunate series of rants against what they repeatedly called “no-go zones” in France, an irritating abuse of both assonance and reality.

The idea was that swathes of the Parisian map and suburbs had become completely impenetrable to police, emergency services, and all non-Muslims. In these thrilling no-go zones, Sharia law was the only law”sort of like the American wild West, but with harems instead of whiskey; other commenters and newscasters repeated the claims as the left-leaning TV channel CanalPlus fought back with sub-Onion irony.

Nolan Peterson’s original claims were more bipartisan in their weirdness than Fox in general blew them up to be. Peterson said that part of the reason for the growth of Muslim “ghettos” was that “some of the French Muslims that I became friends with couldn”t get apartments in downtown Paris because of uh, certain cultural divisions””hinting that it was shadowy discrimination that pushed Muslim immigrants out of the nicer areas.

“No-go zone” is a bizarre misuse of a military term, considering that Peterson includes the US Army on his resume. He went so far as to directly compare the feel of the alleged no-go zones”including MÃ©nilmontant, which is, at press time, the current waxed-moustache hipster capital of the universe, complete with open mics“to war zones in Iraq and Afghanistan.

“There are non-halal butchers in the market, there’s still a sushi restaurant, and as far as I can see, the entire town is not made to go down on its knees to Mecca five times a day.”

The claims were blatantly goofy; apparently the red-rimmed “no-go zone” map that Fox showed was cribbed from a government report on “Zones Urbaines Sensibles,” the very rough equivalent of TIFs. The city of Paris threatened to sue, Fox apologized, and all is well.

Er, except for those stupid crackers in France who have to live with the reality that Peterson was trying to approximate.

The recent death of a friend has made it necessary for me to venture into what should have been the reddest of the red outlines on Fox’s map of skeeve. A quarter-century ago, when it wasn”t all that bad, my friend and her husband bought an apartment in the suburb of Saint-Denis.

Saint-Denis is the home of the oldest Gothic cathedral in the world, where the French used to bury their kings. Nowadays it’s a suburb of Paris with one of the highest concentrations of Muslim-religion immigrants and”what’s more important to Islamist recruiting: their bratty kids”in the Western world.

Buying a place there seemed like a good idea to her at the time. Apartments were cheap, and the town was genuinely multicultural, with a nice Chinese restaurant downstairs and goods from all over the world in the market. It was homey.

When my friend died, unfortunately, I hadn”t been there to visit her since 2007. At that time there had already been a few changes. The owner of the Johnny Hallyday-themed bar where we used to drink perroquets in the 1990s had passed on, for instance. Said owner’s wife had apparently become the disturbingly bruised-looking property or employee of a new, Muslim owner. My friend and I, in our newly conspicuous status as ladies unaccompanied by men, were now distinctly unwelcome at the bar. The Johnny Hallyday jukebox and posters were gone, and the old French guys who used to drink there were nowhere to be seen. But I don”t recall that the streets themselves were ever as unfriendly as they were last week when I arrived in mourning.

I went for a walk with the widower as soon as I got in. We both needed some fresh air badly; as soon as I set foot in my dead friend’s apartment I felt all those things you feel when you realize someone is really gone. The walk was fine”I had a male escort, although I didn”t think much of it at the time. I”m a Western girl.

The next day, however, the husband was at work, and when I got restless I had to go out for a walk alone. I”ve taken many strolls alone in this town, and thought nothing of it. But a few blocks out, a group of men in caftans ran me off the sidewalk and out into the road, muttering about my skirt and my degree of whoreness and laughing quite unpleasantly.

I had briefly thought about whether my skirt might offend before going out, but decided I was being silly and paranoid: it was two inches below the knee, and I was wearing plain black stockings plus thick woolen leg warmers.