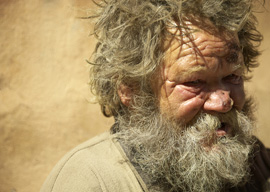 Depending on the bum’s stamina, the act would take maybe ten minutes and would enable you to provide for your family for decades. Besides, people get raped for free every day. You probably walked past dozens of victims on your way to work today and many of them lead perfectly normal lives. Besides, what if you refuse the money and on the way home that night, a bum rapes you? You just flushed $3 million down the toilet.

Not so fast, my greedy comrades. The problem with accepting $3 million is that the transaction is never really over. When you invite people over to your mansion and they”re swimming in your indoor pool, someone is inevitably going to say, “This place is amazing! Where did you make your money, the stock market?”

You can lie and pretend it was something other than allowing a mentally ill boner up your bum, but word is going to get out. What’s worse, your kids will find out. Every day they sit down at dinner or grab a book off the shelf, they are living in a box that tells them, “Let people violate you.” When the kids go to their friend’s house next door they will learn the other dad is a genetic scientist who made his fortune doing cancer research. “What does your dad do?” the friend will ask. “Well, it’s more what he did,” they will respond with their heads bowed in shame.

Preparing your children for a lifetime of shame does way more bad than the good that money can do. Your role as an adult male is not to get rich by any means necessary. It’s to impart character. To refuse $3 million is to show them that one’s pride is more important than anything else. If you don”t take the money, the shack they live in will show them what happens when you refuse to compromise.

But what if the fee was enough to end world hunger? This is where it gets complicated. Now you”re being selfish by not doing it. Now you”re telling your children that you shouldn”t make sacrifices to save the world. Accepting the world-hunger question gets you on a slippery slope that is not unlike the guy who asks for $3 billion. Of course you”d do it to end world hunger, but what would you refuse?

What about some kind of Koch Brothers/Soros fund that finances a political movement? Is that worth the sacrifice of being violated once? How about a $7-million fund that encourages entrepreneurs? It’s not a mindless charity that throws money at a problem to make people feel better about themselves. It’s designed to get valid businesses off the ground, and it has a payback clause that enables the fund to grow. It could create jobs and last forever. At this point, it feels selfish to deny all these people a living. Refusing this kind of money doesn”t send a dignified message to the kids. It says, “Be selfish.”

Therefore, after 16 hours of deliberation inside a steel box, we reached the conclusion that it is worth exactly $10 million to let a bum rape you”$3 million for your family and $7 million for an entrepreneur’s fund. It will be a horrible experience that you will never want to think about, but it will be a noble legacy of which you can be proud. Does that mean you”d say no to a paper bag filled with $9,999,999? I”m afraid so, kids.