The Terror of a Would-Be Wanker 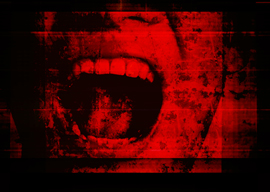 Only an adolescent, overgrown or otherwise, thinks that all his friends are leading lights of their age and demands that they be hailed as such. And there’s as much evidence online for my friendship with the writer Andy Nowicki as there is for my noisy dismay at the iron fist of cronyism that rules the arts.

But enough folks either love or hate Nowicki that to snub his recent releases for the sake of ethical purity would make for a silly gap in coverage. Co-editor of the Alternative Right webzine and author of a slew of strange works of fiction, if Andy’s books weren”t worth recommending, I’m too much of a homebody to have spared the time to befriend him in the first place.

I”ve never understood, however, how Nowicki reconciles his devout belief in the teachings of the Catholic Church with the enthused depravity of his fictional universe. The Nowicki-verse is a psychosexual torture chamber, where God is either a monster or absent. In real life, Andy enjoys a loving, Christian marriage. On paper, he’s a lonely, rape-mad agnostic.

His tales of sex and revenge are more than a safe catharsis, more than wanking to prevent oneself from fornicating: he doesn”t write about sexual desires that he’s too moral to act on, he writes about acts that disgust him too sincerely to be tempting. But this summer, he’s released a truly odd couple of books, which, in their very mismatches, bring his modus operandi into clearer focus.

In synopsis, they don”t even sound like they were written by the same author. This Malignant Mirage is a lurid collection of dark tales that are marketed as “erotica.” Just out this week, on the other hand, Confessions of a Would-Be Wanker: A Memoir/Manifesto is a call to sexual inaction. In a half-philosophical, half-personal argument, Andy describes his lifelong unease with sex and its consequences”the power plays, the fall from grace, the ugly obsession with status it unleashes in the young”adding only a light dressing of personal anecdote.

But these few stories from his life are tellingly spaced. Except for descriptions of movies that resonated with him as an adult (hardly a “life experience” in the mundane sense), all of his written recollections are from childhood. And the vast majority are from adolescence, which he paints as a cloud sliding ominously over the sun of boyhood innocence. He describes the influx of “normal” adolescent hormones as though they were a viral infection of the brain:

My soul, I felt, was corrupted by its manifestation, as my body would have been by a cancer; my sex drive made me into a beast, not just in the sense of causing me to burn with lust in an unseemly manner that robbed me of dignity, but also for the fact that it made me desirous to backstab my friends and sell out my integrity to gain social status.

In Confessions he’s candid about why he never got laid in high school. His unease with sex itself conspired with his tendency to crush on cheerleaders who were out of his league to keep him a humiliated virgin. Now his fictional imagination circles round and round that exit gate from childhood’s Eden. Even when he focuses on adult male protagonists, instead of taking material from his real adulthood, he speculates on the shrew-ridden fate that would have awaited him had he somehow married one of the mean cheerleaders who were the first objects of his desires.

Women also suffer in the Nowicki-verse, both from their own embarrassing sexuality and from the seductive wiles of powerful men, who coldly delight in taking them down a peg or two. (He isn”t part of the majority of fiction writers who struggle to depict the opposite sex; his women are as convincingly miserable as his men.) Several stories from This Malignant Mirage aggressively blur the line we draw around what’s consensual.

“The Interview,” one of Mirage‘s standouts, treats that line with god-like contempt: nothing is consensual. The story reads like de Sade and Kafka writing an episode of The Office together: A young woman applies to work at a strange firm, where the secretary subjects her to a lesbian grope, apparently for the sole purpose of disorienting her, before sending her to meet the boss. This shadowy figure strips away her personal identity to make her not just his sex slave, but his soul slave.

Aside from its frightening metaphor for the modern cubicle farm, the weird, oppressive atmosphere of this story suddenly made it clear to me why classifying Nowicki’s strange tales as erotica is dead wrong. Author, publishers, and reviewers alike have been calling them such because that seems like the best label for the subject matter.

But in structure, they are classic horror stories. Nowicki may belong to a subgenre all his own, but he is a horror writer at heart. His dark energy comes from the friction between what he believes and what he suspects.