The Thought Refs Are Blind! 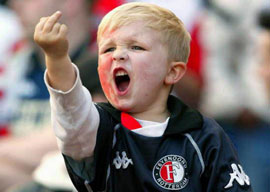 It’s hard to get Americans to care about Britain but it’s worth checking in on those fannies once in a while to see how their social experiments are going, because we tend to follow close behind. Political correctness is leaking into American sports and it’s already completely drowned British football. Now that Adam Silver is a hero for publicly humiliating his Jewish coworker, we are going to see a lot more rules being implemented from off the field. Yesterday, we learned Obama and his imaginary son have decreed an end to “suck-it-up“ sports. This is very disturbing news because The Game is the last bastion of meritocracy in this country. It’s the one area of true American fun that hasn”t been ruined by the thought police.

“Who is best for the job?” used to be at the top of America’s priority list. Sometime in the past quarter-century, however, it was assumed white males were cheating, so the rules were changed to enforce the same pie chart of equality on absolutely everyone. Now that racial and gender diversity are the top priority, the best choice has slipped down to third and a fun game is plummeting toward last place. It’s not like this in MLB. If you can throw a baseball at 100 mph, you”ve got the job. The teams don”t care what race you are, how old you are, or even if you”re an American citizen. They only care who can do the job.

This is what makes American sports so great, but PC is threatening it. Commissioner Bud Selig recently complained that there weren”t enough black players, saying he was “sickened“ by the dwindling numbers. Yeah, Bud, someone is saying no to a record-breaking fastball because it was thrown with a black hand. How brainwashed can you be? Baseball is such a rare skill set, it was a perfect place for blacks to break through racial barriers. Jackie Robinson was met with derision at first but when the fans saw him play, the game erased their prejudice.

“Violence may scare the upper classes but the poor still enjoy it. It’s fun. Banning hate isn”t going to create an environment where minorities feel safe. Having minorities join the game both on and off the field is the only way they can win.”

It was like that in Britain too. Soccer was about the game, and the fans were free to be as violent and offensive as they wanted to be. I won”t deny there were some rude words but it was all in good fun. I was born in Britain in the 1970s, and all I remember about race and soccer was that EVERY kid wanted to be Pele. In the 1980s, when black players such as Mark Chamberlain and Viv Anderson came on the field, the revisionists tell us they were met with bananas on the pitch. This is a myth. I think I remember my grandfather saying, “Darkies don”t have the mettle for football. They lose their nerve,” but their skill was undeniable and the tiny group of curmudgeons like him was soon proved wrong. Soccer was already such a global game, seeing nonwhites on the field didn”t look unusual to us. Britain was tolerant considering the circumstances. We”d recently received a huge influx of “Yardies” (Jamaicans) and everyone was still figuring it out. Today, London is as cosmopolitan as New York, and outside of extremist Islam, they”re all British. The British football league must be about three-quarters darkie by now. There are still yobs waving huge Union Jacks in the crowd. There are still fierce English nationalists who would gladly murder the foreign teams. But what the elite don”t get about soccer hooligans is that they are also black. Even members of the EDL are black. They”ve assimilated and they”re now proud Englishmen but the media class won”t leave it alone. They don”t get the game.

Tottenham Hotspur is a team from Stamford Hill, which is also home to the largest Hasidic Jewish population in Europe. Fans need taunt content so they call them Yids. When I was a kid the chant was “Does your rabbi know you”re here?” because the games were usually held on Saturday. Liverpool supporters are always particularly harsh because scousers are trash. At Spurs games they”d make a hissing sound to mimic the gas chambers. I don”t know if you”ve heard 50,000 people go “Ssss” but it’s pretty scary. That’s what British football is about, though. It’s about conflict. The Spurs” opponents also used to yell “Yidooo” at them for being a Jewish team. It’s really fun to say and once you start, it’s hard to stop. As with rappers taking back the word “nigger,” Spurs fans soon started yelling “Yido” about themselves. They even started calling themselves the “Yid Army.” Black player Jermain Defoe is one of their best and they invented a chant for him which goes, “Jermain Defoe, he’s a yido.” Unfortunately, the PC police have decided the term is racist even if you”re saying it about yourself or a non-Jewish black player whom you adore, so they have instituted a ban on it. The fans are fighting to keep their co-opted insult and the PC police are literally arresting them for it. Is this what we have to look forward to in a post-Sterling America?

In Glasgow, the two teams are Celtic (Catholics) and Rangers (Protestant). The managers” kids still have to go to school with police escorts. I”m a Celtic supporter because that’s what my cousins told me I am. After IRA activist Bobby Sands starved himself to death, Rangers fans would chant, “Can you go a chicken supper, Bobby Sands?” to the tune of “She”ll be Coming Round the Mountain.” If you walked into a Celtic pub today and sang that song, you”d have a bottle smashed on your head before you finished the word “chicken.” This conflict has largely gone unnoticed because it’s white trash fighting white trash. Liberal arts profs don”t study nonminority oppression, so they don”t bother investigating it. If they did, they”d discover that bananas on the pitch and rabbi questions are tame in comparison to the rest of the game’s rabble-rousing. In 1958, when a plane full of Manchester United players were killed, Manchester City fans cheered and began singing this unbelievably offensive song at games:

Who’s that lying on the runway?”¨
Who’s that dying in the snow? “¨
It’s Matt Busby and his boys,”¨
Making all the fucking noise,”¨
Because they can”t get the airplane to go!