The War Against the Past 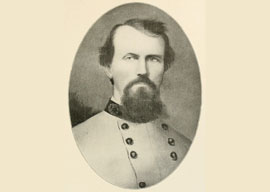 Forrest was also a military genius, as Lytle’s book documents in day-by-day detail. Entering the war with no military training, he soon led a cavalry regiment, hated and feared by the Union commanders. His masterpiece was the Battle of Brice’s Crossroads in June 1864, when his force of 4,700 men routed 8,500 Union cavalry and infantry. There is an animated map of the battle here, from which:

In the four years of the war, Forrest reputedly had a total of 30 horses shot out from under him. He was said to have personally killed 31 people. “I was a horse ahead at the end,” he said.

“There will never be peace in Tennessee until Forrest is dead,” wrote Sherman to the Secretary of War after Brice’s Crossroads.

Forrest nonetheless survived the war, though as a figure of notoriety in the North. A force under his command had reduced Fort Pillow in West Tennessee in early 1864 with much slaughter of the Union defenders, a mix of black and white soldiers. Union propagandists seized on the incident as a case of helpless blacks being shot down while trying to surrender, and a tremendous fuss was made.

Probably there was some vengeance killing, especially of blacks. In intense engagements, such things happen. Shelby Foote notes that sixty percent of the garrison’s whites were marched away as prisoners at last; of the blacks, only twenty percent. He allows, however, that Forrest did what he could to stop the madness; and Sherman, asked by Grant to investigate the incident, found no blame. None of this stopped the propaganda frenzy, and Forrest became an early prototype for George Zimmerman.

He didn”t help matters by taking a leadership position in the Ku Klux Klan right after the war, when the Klan was founded as a resistance movement against the lawlessness of Reconstruction. When, by 1869, Klan groups had descended into terrorism, Forrest was instrumental in disbanding them. In his final years”he died in 1877″he got religion and spoke for racial reconciliation.

There are monuments to Nathan Bedford Forrest all over the South, but he is of course a hate figure to modern sensibilities. Last year his bust was stolen from a park in Selma, Ala.; recently an equestrian statue in Memphis was defaced; and there’s an ongoing fight to rename Nathan B. Forrest High School in Jacksonville, FL.

The War Between the States goes on, but now as a War Against the Past.