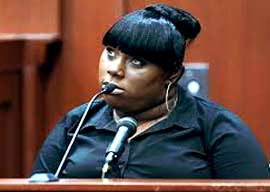 At one point during her cross-examination, Rachel Jeantel, who’s 19 years old and still in high school, claimed that she was unable to read cursive writing. This suggests the possibility that her name is actually “Racial” and she’s been spelling it wrong all along.

Witnesses who testified last week contradicted themselves and one another multiple times. But for a depressingly high quotient of Americans, the facts of the case seem entirely irrelevant. Racial prejudice is a two-way street, and most Americans seem to have prejudged this case the moment they heard of it.

Defense Attorney Don West is a cadaverous and charmless man whose opening statement included perhaps the worst knock-knock joke in history. George Zimmerman, who appears to have eaten any compelling evidence that existed against him since being charged with murder, is likewise devoid of charisma. (If he is acquitted, he will not walk, he will waddle.) And despite the millions of Americans who claim they know exactly what happened on the night in question, Zimmerman remains the only person who actually knows. In the end, this may have been nothing more than a fatal confrontation between two hotheaded douchebags. It’s hard to find a sympathetic character in the entire saga.

The only sympathetic”pitiable, rather”character is America itself. This nation is fatally divided along racial, ideological, intellectual, and economic lines, the whole mess likely preplanned and engineered by culture-busting globalist forces from on high. But even to suggest such a thing will have you labeled “paranoid” by the same blinkered tools who are constantly hallucinating racist demons where none exist.

When O. J. Simpson was acquitted of murdering two white people, white Americans did not riot. When four LAPD officers”three who were white and one who was Mexican, although the press habitually referred to them all as white”were acquitted on charges of using excessive force against serial fuckup Rodney King, LA’s ghettos erupted in solar flares of violence that left 53 dead. Two decades ago, the press carefully sculpted a narrative of institutional racial hatred and King’s abject victimization that consistently sidestepped crucial details, such as the fact that King had two partners with him that night who obeyed police orders and didn”t get beaten.

And now we have a queasy feeling of dÃ©jÃ  vu. Rather than holding the powers that be accountable, America’s mainstream press seems to be taking orders from them. If Zimmerman is acquitted and the multiple threats of rioting and murder come true, the Fourth Estate will once again have blood on its hands. But this time, they may not be forgiven. Let’s hope not, anyway.