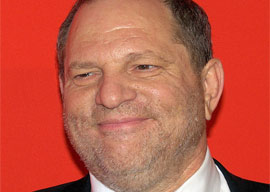 HARVEY WEINSTEIN TAKES A SHOWER
Movie mogul Harvey Weinstein, whose big ugly brick of a head looks as if it was sloppily sculpted out of chopped liver, is the living embodiment of the fact that Hollywood is disproportionately ruled by white men.

It is thus with great joy that we report that the avid supporter of serial sexual-abuse enabler Hillary Clinton has become embroiled in his own sexual harassment scandal. The Holodomor-deniers at The New York Times ran an article last Thursday titled “Harvey Weinstein Paid Off Sexual Harassment Accusers for Decades.”

The article alleges that Weinstein “has reached at least eight settlements with women” over the years—upon all of whom he allegedly foisted his fat, lumpy, pickled body in return for promises of career advancement. His typical MO would be to have a woman arrive for a “business meeting” in a hotel suite, whereupon he would request a massage or ask them if they’d like to watch him showering. Among his more famous accusers are actresses Rose McGowan and Ashley Judd, the latter of whom claims that over the course of an hour in the 1990s, she told Weinstein “no, a lot of ways, a lot of times,” but he kept being a noodge.

Writing for the New York Post, an ex-waitress who claims she served Weinstein numerous times at the Tribeca Grill says that “Inappropriate touching was a habit of his…[he] was every bit the sleazy Hollywood caricature recent reports have made him out to be.”

“We were unaware that Donald Trump and the NRA forced the flyover-country-hating Weinstein to push his blubbery bulk upon beautiful young starlets.”

Without admitting to any legal culpability, Weinstein has taken a leave of absence and issued the following statement:

I came of age in the ‘60s and ‘70s, when all the rules about behavior and workplaces were different. That was the culture then.

I have since learned it’s not an excuse, in the office — or out of it. To anyone.

I am going to need a place to channel that anger, so I’ve decided that I’m going to give the NRA my full attention. I hope Wayne LaPierre will enjoy his retirement party. I’m going to do it at the same [place] I had my Bar Mitzvah. I’m making a movie about our President, perhaps we can make it a joint retirement party.

We were unaware that Donald Trump and the NRA forced the flyover-country-hating Weinstein to push his blubbery bulk upon beautiful young starlets.

CBS LAWYER FEELS NO SYMPATHY FOR DEAD COUNTRY MUSIC FANS
Speaking of entertainment-industry insiders who seem to delight in the idea of Middle America being left to rot and die, a top lawyer for CBS was relieved of her duties after posting the following comment on Facebook in the wake of the Las Vegas massacre of October 1:

If they wouldn’t do anything when children were murdered I have no hope that the Repugs will ever do the right thing. I’m actually not even sympathetic bc country music fans often are republican gun toters.

The lawyer in question, Hayley Geftman-Gold, serves as further damning evidence that American media is just too darned white.

Many in the media are pointing to the shooting—in which 59 people died—as evidence that racist, gun-toting white men need to be stopped and the government needs to confiscate everyone’s guns, melt them in a giant smelter, and sculpt the boiling remains into a thousand-foot statue honoring Winnie Mandela’s buttocks. Yet it makes no sense why a “racist” white man would target an overwhelming white crowd of country music fans—unless the shooter was an ethnomasochist of the highest order. Frustratingly, scant details exist of the shooter’s motives. We suspect that this is because any apparent motives are highly inconvenient to the script that major American media have been dutifully following for about 50 years now.

That’s why a new bill sponsored by California state senator Scott Weiner—who looks gayer than 100 penises in 99 male rectums—has demoted the act of intentionally infecting someone with this fatal illness from a felony to a mere misdemeanor. From henceforth, HIV-positive “gift givers” don’t necessarily have to be shooting their deadly semen all over the mucus membranes of willing “bug chasers.” Now, in the interest of progress and to protect the feelings and self-esteem of those wish to deliberately infect the unwitting with a virus that will likely kill them, gift givers can give the gift that keeps on giving anonymously. To Scott Wiener and all those like him, intentionally injecting someone with a fatal virus is not the real crime—treating that person like a criminal is.