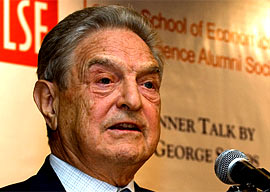 The Week’s Most Haughty, Bawdy, and Tawdry Headlines

GEORGE SOROS AND THE “NEW NORMAL”
Multibillionaire currency manipulator and culture destroyer George Soros was hatched from a dinosaur egg in Hungary in 1930. It’s a little known fact that he was spawned as a result of a one-night stand between Lucifer and the flying Japanese monster-movie pterosaur Rodan. Openly hostile toward all things European, Soros is widely regarded as the most evil man alive.

Soros is so influential over media and politics that the media doesn’t mention his massive role in politics. When the hacker collective DC Leaks recently released over 2,500 documents from Soros’s Open Society Foundations, most major media outlets didn’t make a peep.

Among the leaked documents include a May 12 memo titled “Migration Governance and Enforcement Portfolio Review.” It urges cooperation between Soros-funded groups and “leaders in the field” to “shape migration policymaking” and combat “growing intolerance toward migrants.” In a passage that would give George Orwell psychic incontinence, the memo pinpoints an end goal of its “migration policymaking”:

Accepting the current crisis as the new normal and moving beyond the need to react.

That’s right”money that George Soros funnels into politics is designed to beat down the public consciousness to the point where they accept that being invaded and replaced and raped and decapitated is the “new normal.”

“George Soros is a very bad man. We must stop this evil, scaly pterodactyl before he destroys all that is good and righteous and holy.”

Other leaked documents reveal that in the year 2014 alone, Soros funded more than 90 separate projects designed to manipulate European elections. Another document lists 226 Members of the European Parliament who are “reliable allies” of the Open Society Foundations.

George Soros is a very bad man. We must stop this evil, scaly pterodactyl before he destroys all that is good and righteous and holy.

FEDS SHOVE TRANNIES INTO FEMALE HOMELESS SHELTERS
The most urgent issue facing the American public today is not the $20 trillion debt nor illegal immigration nor globalist destruction of the economy nor a massive and perhaps irreversible cultural malaise that will end in violent nihilism and unprecedented bloodshed. No, our biggest problem is whether we should force everyone to pretend that men who pretend they’re women are actually women.

This is why the Department of Housing and Urban Development is pushing regulations that would force federally funded homeless shelters to allow sexually confused men and other random male perverts to stay in all-women’s homeless shelters merely by claiming that their “gender identity” does not align with the “gender they were assigned at birth.”

..make room for people who are sexually confused at the expense of everyone else….No one is favor of beating up transgender people, but why do you have to force other people to feel really uncomfortable, and in some cases unsafe, just to make your political point?

Maybe because they’re psychotic and preposterously insecure narcissists who think that the planets revolve around them and that every living creature should assent to their delusion or face certain death at the hands of a federally funded anti-transphobia firing squad?

Once the new rule goes into effect next month, expect a nationwide tsunami of homeless male pervs to start crashing female homeless shelters in search of cheap kicks.

50 SHADES OF RAPE
Every passing week gives lie to the warped idea that we live in a “rape culture” and more credence to the notion that false rape accusations are out of control. A British man was recently acquitted on charges of raping his daughter after his defense lawyer realized that the girl had lifted 17 passages in her deposition to police from the schlocky but insanely popular (100 million copies sold and counting) S&M-Lite novel Fifty Shades of Grey. When presented with evidence that she’d fabricated her story about sexual assault at the hands (and loins) of her father, the girl said it was to teach him a lesson for being too strict with her.

Writing for the punchably snarky prog blog Wonkette, a certain Rebecca Schoenkopf says that she believes former President Bill Clinton raped Juanita Broaddrick way back when such acts would be considered “dominant, alpha sex” rather than, you know, “rape-rape.” Schoenkopf says that “good men can rape, and be sorry, and not do it again.” She also says that even though Bill Clinton may have raped Broaddrick, “it doesn’t make him an evil man” nor even “a bad feminist.”

After all, there are worse things than being a rapist. Like, for example, being a racist.

EGYPT PURGES CHUBBY FEMALE BROADCASTERS FROM TV
It’s not often that we hear inspirational news from the Middle East, but now comes the heartwarming news that Egypt’s state-run media has suspended eight female TV anchors for being chub-monsters and ham-planets.

One of the eight anchorwomen is named Khadija Khatab, and from what we can tell, she’s been eating hummus by the bucket. She says that she and the other seven suspended lard-wagons were told to lose weight by mid-September or else “measures will be taken against them.”

Being egregiously catty, a slim woman broadcaster named Alaa el-Sadani claimed she was “sickened by the disgusting and repulsive” sight of her adipose ex-competitors. Another female commentator named Fatma al-Sharawi”who is presumably much more fit and pleasing to the eye than the Eight With Too Much Weight”openly wondered why only eight tele-tubbies had been suspended.