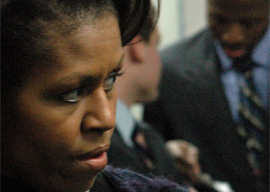 MICHELLE OBAMA FEELS HOPELESS
Michelle Obama is feted and loved around the world for no other apparent reason than the fact that she walks around with a vagina that has ancestral roots in the Dark Continent. Eight years ago when her mulatto hubby was running for president, she flashed her giant white teeth and purplish gums to announce:

For the first time in my adult life, I am really proud of my country because it feels like hope is finally making a comeback.

During his time in office, Barack Obama doubled the national debt, made economic conditions far worse for black Americans, and has allowed race relations to deteriorate to the point where the nation is more divided than at any point since the eve of the Civil War.

Suddenly, Ms. Obama is not feeling so hopeful, but it has nothing to do with the financial and cultural wreckage her floppy-eared mate has bequeathed unto America.

She recently sat down with billionaire Oprah Winfrey, whose cousin says she lied about growing up impoverished and who has blossomed into a hideously spoiled diva who never stops bitching about the nation that made her a billionaire.

Miss Obama, upset that she and her family can no longer milk America’s racist white taxpayers to the tune of $85 million to go on lavish vacations that fairly pulsate with bling, this whiny recipient of affirmative action programs that discriminate against white students with higher grades is suddenly kvetching from yet another Hawaii vacation that “we are feeling what not having hope feels like.”

“Pardon us for noticing that the world seemed much saner when it was rampagingly “sexist.””

Miz Obama, we”ve endured eight years of your “hope and change.” And we hope that you”and everyone who thinks like you do”never gets a crack at trying to change this country again.

RAPPER ACCUSED OF ANTI-SEMITISM
Lupe Fiasco is the stage name of a Chicago-born rapper whose parents saddled him with the self-segregating name of Wasalu Muhammad Jaco, which is an ancient Arabic term meaning, “Fuck you, white America.”

Rappers are paid handsomely”Fiasco’s net worth is estimated at around $8 million”to defame white people and openly call for their murder. But now he has gone over the line and said bad things about Jews. His new record features these shockingly anti-Semitic lyrics:

Artists getting robbed for their publishing by dirty Jewish execs who think it’s alms from the covenant.

Jonathan Greenblatt of the Anti-Defamation League, apparently upset that a black rapper had turned his attention briefly away from defaming non-Jewish whites, chided Fiasco on Twitter, only to be chided back. At a recent concert, Fiasco hinted at a premature retirement:

[I”m being] painted an anti-Semite”which is like death in the music business…like you”re fucking dead, music, movies, TV”because you”ll never be able to escape it, because they just want to be victims.

Suggesting that being smeared as an anti-Semite spells career death for anyone in the entertainment industry implies that Semites wield disproportionate power in this industry, and everyone knows that this is an old and discredited anti-Semitic myth.

NAT GEO GOES TRANS
A long time ago in a cultural galaxy far away, National Geographic served as the world’s premier publication for adolescent boys waiting in dentist’s offices who wanted to ogle topless black women cavorting in their natural element.

But lately”as is the case with nearly all media funded by globalist interests”it has become little more than a hollow mouthpiece of Cultural Marxist nonsense. In lieu of topless, spear-wielding black nubiles, the January 2017 cover of National Geographic features a nine-year-old white boy who thinks he’s a chick.

Today…beliefs about gender are shifting rapidly and radically. That’s why we”re exploring the subject this month, looking at it through the lens of science, social systems, and civilizations throughout history.

Let us know when science discovers a new chromosomal system. For now, we”re quite content with the outdated, debunked, discredited, and downright hateful notion of sexual dimorphism.