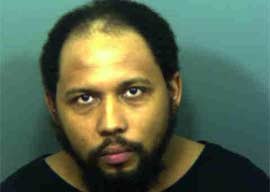 The Week’s Most Paranoid, Schizoid, and Negroid Headlines

BLACK LIVES MATTER ORGANIZER CHARGED WITH PIMPING
Black Lives Matter is undeniably the most important and inspirational civil-rights movement of our time, which is why it really, really sucks that a prominent BLM organizer has been arrested and charged with pimping an underage girl.

Charles Curtis Wade, a “former fashion stylist turned consultant” from Texas, was active in the Ferguson “uprising,” in which countless angry black people and a smattering of white communists rose up to protest the fact a cop shot a giant obese kid who was trying to steal his gun only moments after the kid robbed a grocery story. Through his Operation Help or Hush”ostensibly formed to aid and abet other uprising activists to actively uprise”he reportedly raised $50,000 through Twitter alone. According to the St. Louis Post-Dispatch, Wade’s group “set up secretive safe houses for protesters thought to be targeted by police,” which sounds like an entirely wholesome and righteous activity.

Wade had been invited to appear at the White House last Tuesday along with a dusky locust swarm of other Black Lives Matter activists. But he chose not to appear, possibly because he is facing seven felony counts of human trafficking and prostitution. The girl he allegedly pimped out of a Maryland motel is seventeen and white.

“Who cares about white people, anyway? Those paranoid bigots think their way of life is under attack, so of course they all need to die out already.”

The term “Oriental” has no place in federal law, and at long last this insulting and outdated term will be gone for good.

It’s noteworthy that she didn’t bother to mention the Negroes. Typical Oriental.

SECURITY GUARD REMOVES MAN FROM WOMEN’s BATHROOM, IS ACCUSED OF HATE CRIME
It’s hard to be a “Transgender Woman” in this country, especially if you’re black and trying to use the little girls’ room at the supermarket. The flawlessly named Ebony Belcher”who looks like a woman but whose basso profondo voice leaps out at you around 0:35 of the above-linked video” suffered grievous indignities recently when a 45-year-old female security guard ejected Belcher from the ladies’ rest room at a Giant supermarket. Belcher went belching to “trans activists,” who notified the police. Security guard Francine Jones was arrested and charged with simple assault. The police report noted that this “assault””which apparently did not involve violence”was also a suspected “hate crime.”

IS IT OK FOR WHITE RAPPERS TO SAY “NIGGA”?
An uplifting, forward-thinking, and thought-provoking dialogue between a black music critic and a possibly Jewish music critic involved whether it was unacceptable and problematic for white rappers to use the word “nigga” in the process of their rapping.

“Should White Hip Hop Fans Be Allowed To ‘Rap’ The N-Word?” asks the pointed headline at HipHopDX’s interracial dialogue between Marcel Williams (obviously, from the name alone, you can tell that’s the black one) and Jason Bisnoff (the suspected Semite).

Bisnoff”who makes a point of describing himself as “pretty damn white””instructs his “fellow Caucasians” to refrain from using any iteration of “nigger” while in the course of rapping, whether it be in front of throngs of adoring fans or privately in one’s home in front of the mirror. He says it’s a hurtful word that is inextricably linked to the mental and physical tortures that African Americans have endured and continue to endure in this horribly racist white-supremacist nation, so any white rapper would be crazy to use it.

So for the legions of Taki’s Mag commenters who will inevitably one day become aspiring rappers, kindly refrain from saying “nigga,” or aspiring hip-hop race theoretician Jason Bisnoff will get upset.

Spielberg’s new kiddie adventure movie The BFG is based on a 1982 book by Dahl. But yet, alas and alack, Spielberg claims he was unaware that in the early 1980s Dahl had stated the following in an interview with The New Statesman:

There’s a trait in the Jewish character that does provoke animosity….I mean there is always a reason why anti-anything crops up anywhere; even a stinker like Hitler didn’t just pick on them for no reason.

Well, that was a low blow. Did he really need to stoop so low as to call him a “stinker”?

Meanwhile, vertically deficient rodent pundit Ben Shapiro has an article called “Trump’s Anti-Semitic Supporters” in National Review, and it represents a bold takedown of the populist billionaire’s fascist demagoguery rather than the desperate death rattle of a neocon shill’s career.