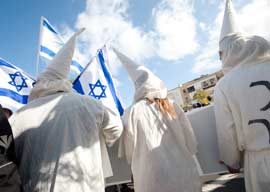 A NEWER, MORE INCLUSIVE KU KLUX KLAN
Klansman John Abarr made headlines last year when he joined the NAACP while retaining Klan membership. The self-described “grand goblin” of a tiny KKK splinter group calling itself the “Rocky Mountain Knights of the KKK” is making headlines yet again by declaring that his group would be open to blacks, Jews, and gays so long as they all work together for racial separation. Working together…to separate. OK, then. O-KKK, then.

KELLOGG’s CORNHOLE FLAKES
Has Tony the Tiger come out of the closet? Michigan-based breakfast-cereal magnate Kellogg’s is facing a backlash by the Mississippi-based American Family Association”designated by the Alabama-based Southern Poverty Law Center as a “hate group,” but what isn”t these days?”after sponsoring a gay-pride march in Atlanta and publishing an ad featuring a very proud-looking Tony the Tiger encouraging members of the “LGBT” community to “WEAR YOUR STRIPES WITH PRIDE.”

What they”ve done to Tony is thoroughly disgusting. They won”t stop until every comic character in the world is homosexual. Criminal is what it is. So sad.

Tony the Tiger needs to be worrying about kid nutrition, not adult sex lives. This is pervy.

Kellogg’s Frosted Flakes have gone from grrrrreat to gggaaayyy. What they”ve been frosted with all these years is suddenly a matter of grave concern.

HATRED: STILL ALIVE AND WELL, THANK HEAVEN
A persistent quirk of the quirk-laden latter-day progressive-activist mindset is the simultaneous impulse to stamp out all forms of “hate” everywhere while still for some reason needing to see hatred everywhere. And even if they can only find such “hate” in isolated instances, they will trot it out as evidence that it is “alive and well.” A white columnist for the esteemed Tonawanda News in upstate New York claims his black friend was racially profiled by police, leading him to declare that “Racial profiling [is] alive and well.” A black columnist for the Milwaukee Courier (“THE NEWSPAPER YOU CAN TRUST SINCE 1964”) declares that “The effects of slavery are very much alive and well.” A Huffington Post scribe who describes herself as “a young woman in medicine” as well as “a natural blonde” alleges that “Sexism Is Alive And Well in Medicine.” Another HuffPo writer who describes herself as an “intersectional feminist” claims that a single child-pornography case “Proves Misogyny Is Alive and Well in Canada.” A writer for the website All Voices claims that the shooting death of Michael Brown in Ferguson, MO, proves “conclusively that racism is alive and well in America.”

It’s a good thing for them all that these persnickety bugaboos are “alive and well,” for without them, their careers would be “dead and buried.”