The Will to Powerlessness 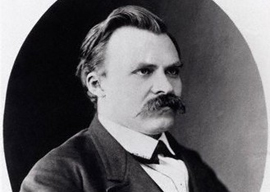 Writing in the 1880s, Nietzsche depicted Jews and Christians as quintessential slaves. The analogy is now dated, for today’s slave morality emanates from the left-wing priestly caste of secular humanists who defend others’ interests at their own expense. Who are these priestly figures? People such as John Kerry and Bill Clinton and Nancy Pelosi and Warren Buffett and Garrison Keillor and Ben Bernanke and Michael Moore and Oprah and all those screeching dimwits on The View. They promote egalitarianism, which sucks the life out of culture and transforms aristocrats into servants of compassion. They have exalted multiculturalism over their own heritage, have imposed oppressive systems on themselves and other aristocrats, and have catapulted an inexperienced, underequipped, indecisive, conniving, awkward, sinister, spiteful man—Barack Obama—to the US presidency.

Professor Gottfried wrote this about his colleague:

Despite his screaming about Christian sentimentalists, this fellow was always going on and on about the “marginalized.” Although a self-proclaimed free thinker, he was the incarnation of what Nietzsche rightly or wrongly despised as Christian silliness.

It seems this colleague was invested in what Derridean postmodernists call “recontextualization,” the remaking and reshaping of meaning—in this case, the application of Christian vocabularies to secular causes. Slave morality at its best.

The failure of the aristocratic class—what’s left of it—to distinguish the moral from the immoral, the good from the bad, has created a society that determines public policy and (mis)educates its citizens based on indefinable concepts with no direct relation to the phenomenal world. Diversity and multicultural mania, besides signifying nothing, have made us slaves of false virtues, enablers of cultural and economic regression, and perpetuators of self-imposed discipline and denial.

By recycling mantras about the disenfranchised, the Western world in general and the United States in particular have caused the men of ressentiment to become super-enfranchised. By obsessing over the disempowered, aristocrats have disempowered themselves. “Rights.” “Diversity.” “Justice.” Count the number of times you see these words in the mainstream press this week. Consider why and for whom they’re conveyed. And then ask yourself: Are we not all slaves yet?