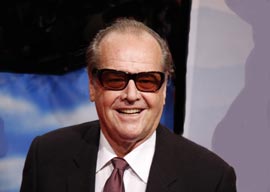 I had a short chat with BBC Radio concerning the actor Jack Nicholson, whom I knew slightly during the 70s and 80s. Alas, it had to do with age, his and mine, 77 and 78 respectively. No, the man on the other side of the telephone did not ask me anything embarrassing. All he wanted to know was: Do women still come on to an oldie, or are they, as Jack Nicholson claims, a thing of the past?

Well, for starters, I do not believe that Nicholson is telling the truth, that he’s now alone and fears he will die alone because women have abandoned a sinking ship. He has a sense of decorum, and knows how ridiculous a man our age sounds when talking about women, especially younger women, something Jack and Taki have in common. Jack Nicholson has been chasing beautiful women all his life and will continue to do so up to the moment the man in the white suit pays him a visit. And that goes for me also, except that his fame and celebrity status give him an unfair advantage over the poor little unknown Greek boy.

“No, old Jack, whom I hardly know, is telling a cock-and-bull story because he’s a gent.”

Never mind. I was born behind the eight ball, so I’ll take it like a man, a man whose four great loves were unrequited—Ava Gardner, Betty Grable, Cyd Charisse, and Ginger Rogers. In fact, it was worse than that. They never knew of my existence, except for a brief intro in Spain to Ava, who asked me if I was gay when I told her I was a tennis player and not in the bullfight business. That was in 1957, and later that year I had a chance with Ginger, and also blew it. Then, years later, I went swimming with Cyd off the Cap d’Antibes, came on too strong—having just met her—and was told to drop dead. Drown, rather. Betty, I never met. This is the story of my miserable life, and the title of my autobiography is Le Misérable.

What I could have told the BBC interviewer is that Jack Nicholson should consider himself lucky he never seduced Feng Lung, the lady in central China who found her husband had used her mobile to send compromising messages to his girlfriend. She chopped off his penis, and, once the poor man got it reattached by medics, sneaked into his hospital bed, chopped it off again, and threw it out the window, where a stray animal disappeared with it. Ouch!

No, old Jack, whom I hardly know, is telling a cock-and-bull story because he’s a gent. And this despite the fact he grew up thinking his grandmother was his mother, something quite normal for trailer park people, I am told. Nicholson stuck by Roman Polanski when the pocket Pole was toxic, and also stuck by Eddie Dodson, that most prolific of bank robbers; he hit 64 banks in nine months and made Willie Sutton look like an amateur. (When asked by a judge why he robbed banks, Sutton earned an entry in Bartlett’s Book of Anecdotes by telling him: “Because that’s where the money is, judge.”) Dodson was given a job by Jack after he got out of the pokey, but he kept doing drugs till they ended his employment by a major Hollywood star.

And speaking of Hollywood, the number one producer in the world swept through Gstaad like a tsunami, and I took him up to the Eagle Club, where he was a great hit. Harvey Weinstein produces the only films that are watchable nowadays. No science fiction, no flesh-eating robots, no creatures from other planets that enter earthly bodies, none of that crap. He arrived with his very pretty and very well-mannered, fashion designer English wife; five children; and his mother-in-law, Caroline. Harvey previewed The Imitation Game for us, a wonderful movie that has both its stars, Benedict Cumberbatch and Keira Knightley, plus a host of others nominated for Oscars. I hope it wins for both best actor as well as director because it truly deserves it.