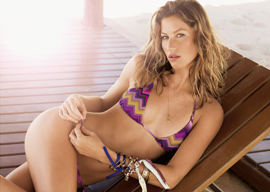 Another week, another group of ambitious young upstarts”squint and you can include Michael Moore and Rupert Murdoch in there”who are getting into all sorts of trouble and new predicaments. Takimag’s Daredevil Hall of Fame claims its second set of famous faces:

We”ve finally found someone able to upstage the Super Bowl: Greek media empress Arianna Huffington, who announced during Sunday’s waning hours that she sold her baby, The Huffington Post, to AOL. She gets points for succumbing to that behemoth’s corporate maw”not many “journalists” would be comfortable with that leap”and in return, she’s now editor of all AOL content. Plus, her company made a sweet $315 million ($300 million of that in cash) from the deal. Not bad for a blog.

The upstart Web company Groupon spent $3 million on a Super Bowl spot that immediately offended millions of chip-munching viewers during the big game. The long-lost Timothy Hutton starred in the ad, stating in the mock-serious opening: “The people of Tibet are in trouble. Their culture is in jeopardy.” Then there’s the kicker: “But they still whip up an amazing fish curry.” Some Groupon diehards threatened to cancel their free subscriptions, but the company is likely living off the extra attention from being the year’s most controversial ad. Bad publicity is still publicity”even at $3 million. 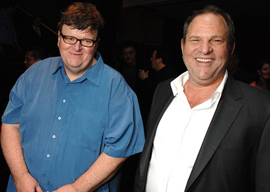 Two media blowhards are going head to head. Michael Moore is daring to sue Harvey Weinstein over profits for his hit documentary Fahrenheit 9/11. Mike says their deal was a 50/50 split but he never got his due from the Weinstein brothers” company. It takes some big cojones to bring Harvey to court”that man has a reputation as a contentious, bullheaded yeller. Then again, so does Michael.

As Arianna expands her blog’s reach to hundreds of millions of people, Rupert Murdoch is also not-so-quietly trying to take over the world. He’s continuing to push the deal for his News Corp. to purchase the rest of the UK’s largest television network, British Sky Broadcasting. This is much to the horror of Culture Secretary Jeremy Hunt, who’s been resisting the buy at every turn. And look! Ol” Rupe, who’s nearly 80, also showed off his fancy new toy, the iPad-only newspaper The Daily, last week. Apparently old scheming dogs can learn new tricks.

Speaking of old dogs, that train wreck Lindsay Lohan had one day of reprieve before being charged for grand theft on Monday. The sticky-fingered bottle blonde is accused of stealing a necklace from a jewelry store. It was a gift, she says! (Ballsy move, that.) The Venice, CA, store says the $2,500 bauble was definitely not given to La Lohan and had reported it stolen in late January. If she in fact took the necklace, the star will immediately be deemed Daredevil of the Year. If convicted, she could face prison time alongside plenty of other Mean Girls.

Is this daring or just plain dumb? Gisele Bundchen still has her looks, but her brains may be lacking. The supermodel and aspiring health expert says sunscreen is poison. “I don”t use anything synthetic,” said the Brazilian, who claims she doesn”t expose her skin to the sun after 8 a.m. to counteract its harmful rays. And whoops, Gisele was also, at least at one time, shilling for Nivea Sun products. Flaunting her “wisdom” while possibly exposing herself to skin cancer? How courageous, how heroic!

And the kind-of-sort-of Daredevil of the Week is silver-haired fox Anderson Cooper, who got his beautiful face roughed up while reporting on the Egyptian uprising. Mubarak supporters punched Cooper ten times in the head, yet, ever the dedicated journalist, he kept reporting the news. Cooper’s only a “sort-of” daredevil because, sadly, he’s left Cairo and is now back in the States making the talk-show rounds. Letterman’s couch will be mighty comfortable compared to Tahrir Square’s throngs.