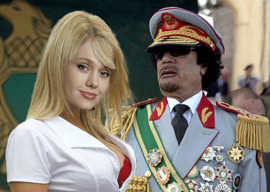 They’re casually dropping (nay, shouting) the F-word in front of a billion people, flouting the law, and defying hardline dictators. Yes, it’s that time of the week, when the A- through D-listers try their damnedest to make it into Takimag‘s Daredevil Hall of Fame. And the winners are…

Galyna Kolotnytska! You know what’s almost ballsier than thousands of frustrated Libyans taking to the streets to overthrow eccentric leader Muammar Gaddafi’s 41-year-long oppressive rule? Gaddafi’s hot nurse and caretaker abandoning him in his biggest time of need. Kolotnytska was memorably described in the last WikiLeaks cable dump (and Julian Assange’s dreams?) as a then-38-year-old “voluptuous blonde” who was constantly at Gaddafi’s side. The Ukrainian mom, who might also be romantically entangled with the dictator, told her daughter the country’s unrest is reason for her to return home. If her absence won’t topple his regime, it’s unclear what will.

Hey, Melissa Leo, what’s more outrageous than dolling up for your personal For Your Consideration ads and begging for an Oscar win? How about convincing the Academy to give you the little gold man and then becoming the first person to say “fuck” live at the Academy Awards? When Leo won for The Fighter on Sunday night, she responded with mock amazement, saying “When I watched Kate [Winslet] two years ago it was so *@!^ing easy.” She apologized backstage with this uniquely literary excuse: “There’s a great deal of the English language that is in my vernacular.”

Unruly Fox News boss Roger Ailes could be inching his way toward an indictment. Last week, Judith Regan dredged up a five-year-old story, but oh, is it a doozy. She claims Ailes was the News Corp. honcho who told her to lie to the feds about her affair with Giuliani police chief Bernie Kerik, a snafu that got her fired from HarperCollins and a multimillion-dollar payout from the company. But now Regan has a recorded phone call as proof, which would make Ailes guilty of obstruction of justice. Hence, the alleged indictment. Got all that? No? In summation: Regan’s got guts.

New parents Elton John and David Furnish are inducted for flying in the face of convention this week by choosing Lady Gaga to be godmother to their new son Zachary. They’ve yet to confirm the news but are said to be happy with her stance on gay rights”well, yeah“and her remarkable ability to incubate. We’ve never wished ill on Elton before, and now, lapsed Catholicism aside, we”re praying he lives to be 120. Gaga making goo-goo noises at a baby? Thanks, but no.

Congratulations, Jeremy Bernard! You’re not only the first highly scrutinized White House social secretary successor to Desiree Rogers, you’re also the first man to ever hold the position. And the first gay man to boot! How does he feel? “Deeply humbled”? Yes. Bernard’s not a daredevil for busting the gay glass ceiling and working at 1600 Pennsylvania Ave. Nah, it’s the gate-crashers and criticism and cultural idiocy swirling around that’ll make his job tough. Good luck, J!

Kathy Griffin“the woman who once dated Steve “Dancing with the Woz” Wozniak”is now knocking boots with the Old Spice Guy. A source says Griffin and Isaiah Mustafa are dating casually. Is there anything more intimidating than dating the man that every dude admires? The man whose shower products they buy and whose backwards horse-riding skills are beyond enviable? Not saying the comedienne isn’t up to the challenge, yet look at Woz, now back to this man. That’s a heroic and scary step up.

Kim Kardashian squeezes into our last slot this week. The reality-TV doyenne is in talks to portray one of the Gotti clan in an upcoming biopic. She’d be the wife of John Jr. (Sputtering Oscars host James Franco is rumored to be up for the role.) John Travolta’s already in the hot seat as John Gotti. Seems like a bold career move for the slightly ditzy Kardashian, whose only other roles were on CSI: NY and Disaster Movie. Perhaps we should christen the film’s producers as the truly daring ones.