Those Sweet, Surly Bonds of Earth 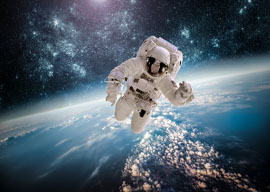 I knit my brow at scientism because it contains all the repulsive qualities common to space enthusiasts like Seager: hubris, pride, and unwarranted confidence.

The ideology that holds science in high esteem is the same ideology that has tormented mankind since the Fall. It’s one and the same with the ideology that attempts to alter and transmute the human genome, construct gods out of tech nerds, and abolish private enterprise in the name of the collective.

The drive for space travel is, at its core, fueled by what Notre Dame professor Patrick Deneen describes as “our inability to accept our condition as created human creatures on this earth created for us.” We hate ourselves and our home, so we”re determined to create new versions of both. This condition used to be called self-loathing. Now it’s called progress.

President-elect Trump recently expressed interest in putting a man back on the moon. No doubt Trump sees a return to our lunar neighbor as a much-needed morale boost to the national spirit. But what would it really achieve in the end? Would our morose view of the future be brightened? Would the underlying structural issues of our economy be fixed? Would our lack of trust in necessary institutions be corrected? Would it restore the broken bonds that once held America together?

It’s doubtful. Space is not a cure for ennui. Before we fly off into the unknown stars, perhaps we should know ourselves a little better.