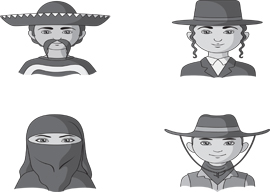 The one area where this happy duality broke down was in colleges. For whatever reason, Jews would not contribute much in terms of institution building to American higher education. Instead, they wanted to attend ancient universities founded by colonial Protestants.

By 1920, Columbia U. was already about 40 percent Jewish and Harvard 20 percent. Hence, around 1922, Ivy League colleges started to impose maximum quotas to restrict the percentage of Jews to no more than just several times their share of the population. (Donald Trump’s alma mater, the U. of Pennsylvania, with its strong interest in finance, was the least restrictive and thus the most Jewish.)

Over time, however, the now heavily Jewish leadership of the Ivy League ran into similar problems with Asian applicants as WASPs had once run into with Jews. If Harvard admitted its class of 2022 solely on test scores and grades, it would be predominantly Asian. But then Harvard’s prestige would decline and even Asians would stop trying so hard to get in because Asians know that they aren’t, on the whole, as creative or as cool as whites.

The Trump administration is currently suing Harvard to disclose its admissions data to see if it is racially biased against Asians. (Answer: Yes, Harvard is discriminating. But over the past four centuries, it usually has not been a prudent idea to bet against Harvard figuring out how to get its way.)

But even more relevant to Jewish attitudes is the history of Russia. In medieval Poland after the Mongols had massacred the urban middle class, the surviving Polish nobility invited in Rhineland Jews to provide numerate services such as tax-gathering and money-lending. After Muscovy was later liberated from the Mongol yoke, it preferred German gentiles to play similar roles.

But as Imperial Russia gobbled up Poland, it acquired Jewish populations, of which it was highly suspicious. (Putin, of course, is a sort of neo-czar, so he triggers atavistic fears of czarist Cossack pogroms in American neocons.)

The Bolsheviks who seized power 100 years ago, however, were highly diverse. Trotsky was Jewish, Stalin Georgian, and Lenin a one-man coalition of the fringes: German, Swedish, Jewish, Kalmyk, and perhaps even a little Russian.

The Soviet Union was the world’s first anti-anti-Semitic state, with strict laws against bias against Jews. Not surprisingly, Jews flourished in a system of careers open to talent (unless, of course, you were an indigenous aristocrat, bourgeois, or kulak).

UC Berkeley historian Yuri Slezkine’s award-winning 2004 book The Jewish Century documents how much Jewish talent, such as his mother’s side of the family, flowed into the organs of the Bolshevik regime, such as the secret police. This made the Soviet Union increasingly popular with Jews in America who looked to Communism as the first system under which Jews were granted a level playing field to make good.

As the 1930s progressed, Stalin murdered more and more of his fellow Old Bolsheviks, many of whom were Jewish. But he also promoted Jews, such as his NKVD head, Genrikh Yagoda, to carry out his Great Terror.

When Hitler attacked in 1941, the Politburo realized that it had to offer more opportunities to ethnic Russians if it wanted to generate the enthusiasm needed to survive.

Still, as Simon Sebag Montefiore’s 2005 book Court of the Red Tsar documents, outright anti-Semitism remained virtually unthinkable in the Soviet Union until Golda Meir’s visit in 1948 generated so much enthusiasm for Israel among Stalin’s Jewish flunkies that he began plotting to resume his massacres, this time with largely Jewish victims.

Fortunately, Stalin died first in 1953 and his successors were less bloodthirsty. But they tended to allow subordinates to discriminate against Jews in hiring and promotions, if they felt like it. Some did, some didn’t.

During the Six Days War of 1967, the Soviet Union sided with Israel’s victims, which provided Richard Nixon with an opportunity in 1969 to recruit some pro-Israel Jewish intellectuals to his side. Sen. Henry Jackson (D-Boeing) got to Nixon and Kissinger’s right with the slogan “Save Soviet Jews.” It wasn’t clear that they were in particular need of saving; rather, their careers were languishing under a Soviet system of affirmative action that tried to distribute the good jobs more broadly.

In the 1990s, American economists like Larry Summers and campaign consultants like Dick Morris flocked to Moscow to advise Boris Yeltsin on how to “reform” the economy and win the 1996 election. By the end of the decade, the average life span of Russian men had dropped into the 50s, while a majority of the richest oligarchs looting the country were Jewish.

Putin managed to make Russia’s corrupt billionaires look a little more like Russia, which may well have headed off an outburst of anti-Semitism in response to the rapine of the Yeltsin years. But to American Jews, Putin’s policy of diversity and inclusion in the really good jobs seems like vilest anti-Semitism.

The simplest solution for the predicament that Jewish Americans have gotten themselves into by promoting a campaign of hatred against straight white males (among whose most prominent members they rank highly) is to knock it off.

Without Jewish brains and money, the social justice jihadis who are increasingly threatening Jewish prosperity would be seen as ineffectual clowns.