Tiptoeing Through a Minefield of Pansy Asses 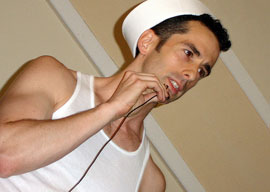 Savage called the retreating clusters of offended and presumedly Christian students “pansy asses.” Looking so empowered that one would think he needs to carry extra battery chargers whenever he travels more than 25 miles, Savage gloated that he was “beating up the Bible,” then apologized if anyone’s feelings were hurt. “But I have a right to defend myself,” the defiant little banty rooster asserted.

But nobody attacked you, ya douche. You were attacking them, and they quietly left.

Although what constitutes “bullying” is in the eye of whoever thinks they”re being bullied, Dan Savage”it’s his real name, a coincidence as glorious as if he”d been born “Percy Fierce” or “Lance Fabulous””has left quite a fecal slime trail of either bullying his ideological opponents or, if you don”t want to use that word, being a generally aggressive and hateful dickhead toward them.

What’s the currently acceptable term for a gay male blogger? A blaggot? A glogger? A blomo? Whatever it is, Dan Savage is probably the most prominent one in the blogosphere. He was the one who created Rick Santorum’s frothy, feces-flecked “Google problem.” He also claimed that while sick with the flu, he once licked almost everything he could find in Iowa Republican Gary Bauer’s office, including doorknobs, keyboards, staplers, phones, and clean coffee cups. (He later claimed he had made up the entire incident, and he’s also been caught repeatedly lying about his age, so he may suffer from a low T-cell count”with “T” standing for “truth.”)

“How would he feel if someone sent him an aborted baby? Or a severed vulva? Not too good, I’ll bet.”

He’s also displayed tremendous tolerance for diversity of opinion. “I wish the Republicans were all fucking dead,” he once told Bill Maher while cameras were rolling. He once said he wished a Pennsylvania politician would get “dragged behind a pickup truck until there’s nothing left but the rope.” He invited Herman Cain to orally pleasure him to prove, as Cain had asserted, that homosexuality is a choice. (Cain chose not to orally pleasure him.)

When Mississippi TV reporter Kandiss Crone did a story on a local adult store that led to the store owner’s arrest, Savage suggested that his readers send Crone their used sex toys. How would he feel if someone sent him an aborted baby? Or a severed vulva? Not too good, I”ll bet.

Despite all his taunting of Bible-thumpers, they seem to mostly write him off as a creepy sodomite and stay as far as possible from Dan and his bodily fluids.

For me, one of the most enjoyable parts of observing leftist identity politics is its tendency to fracture…then splinter…then atomize…then, each week, suddenly discover a new subatomic level of identity. It’s a boiling, swirling alphabet soup of micro-identity where at any given moment the LGBTTIQQ2SAs at the gay bar might all suddenly accuse one another of not understanding one another, leading to heartbreak and bloodshed.

His fellow homos and similarly minded sex freaks accuse Dan Savage of transphobia, biphobia, and pozphobia (the irrational fear of someone with the ability to infect you with a deadly virus).