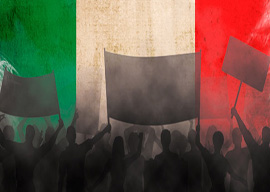 But it does not even end here.

According to those same ANSA figures, he also gets 21,000 euro a month net to administer the taxpayer money that his party receives.

In total, the political parties to which the 71 Lazio regional councilors belong (of which Batman’s right-wing party forms the majority) received from the taxpayers in 2011 “for the functioning” of their party groups a total of 8,900,000 million euro”roughly $11.4 million.

And it is all perfectly legal, though what the parties do with all that taxpayer money may or may not be. So as a result of a toga party Fiorito, like so many Italian politicians before him, is now under investigation for all the possible crimes related to that money. He has resigned his post as capogruppo.

The presidente of Lazio, Renata Polverini, was extremely reluctant to resign because, hey man, where’s the crime? She was also a guest at the toga party, though dressed as a modern Roman rather than an ancient one. At a press conference last Monday she said that the vast sums the parties received were spent “per senso dello Stato“ (out of duty to the state) and “per rispetto dei cittadini“ (out of respect for the citizens)! She has now resigned. Her predecessor Piero Marrazzo also resigned in 2009: A married man with children, he was secretly filmed semi-naked in stockings and suspenders next to a heap of cocaine in a Brazilian transsexual’s Rome apartment.

Right-wing, left-wing: It makes little difference. Politicians everywhere in Italy have their snouts in the trough, not just Batman and his mates down in Rome, and not just at the regional level.

The average net monthly wage in Italy is only 1,300 euro, so it is easy to see why Italians are so contemptuous of their politicians.

Italian politicians are the highest paid in Europe and probably in the Western world. They are also among the most corrupt. So why are they so corrupt if they are paid so well?

The answer is simple enough: Italian politicians are corrupt because they are Italians. But why are Italians so corrupt?

The Italians answer this question in two ways. “Our politicians are corrupt,” they insist, “but we are not.” Such a distinction, of course, is unsustainable. An Italian politician, no two ways about it, is an Italian. Secondly, the Italians say: “Tutto il mondo Ã¨ paese.” (All the world is the same town.) In other words, people are corrupt everywhere. So I ask: “So how come there’s so much more corruption in Italy?” And they retort: “People in other countries are just piÃ¹ furbi (more cunning) and don”t get caught.”

I do not believe that, either. So my view is this: Unfortunately, a country”especially a democratic one”gets the politicians it deserves.