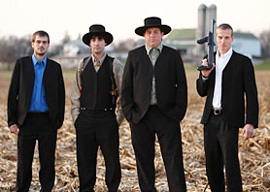 As Jim Goad recently and inimitably explained, this show focuses on an Atlanta rapper named Shawty Lo and his 10 “baby mamas””arranged here more or less in order of “thickness””and their 11 children. Practically everyone on the show is named, from the sounds of it, after the brands of birth control their parents declined to employ. No wonder poor Shawty Lo couldn’t recite his kids’ handles on request.

Marriage may be “for white people,” but petitions aren’t anymore: a disgusted African-American woman launched one to get the show canceled before it can air. At press time, the petition had attracted over 17,000 signatures, those names a “post-racial” mix of WASP-ish and “ghetto.”

Will lefties and righties alike steer clear of All My Babies’ Mamas as if it was Martin Luther King Boulevard? Who can say, when something such as Here Comes Honey Boo Boo gets renewed even though “nobody watches it”?

What about Amish Mafia? Again, this is a real show in the sense that it’s an actual program produced by the Discovery Channel. Whether or not it’s “real” in any other meaningful sense has sparked some debate.

It purports to offer a glimpse into the world of “the men who protect and maintain peace and order within the Amish” of Lancaster, Pennsylvania. That this black-hatted posse of supposed pacifists is heavily armed is one of the clues that the show might not be cinÃ©ma vÃ©ritÃ©.

Pennsylvania locals aren’t happy with the show’s portrayal of their Amish neighbors, and the local prosecutor says he’s never heard of this crew. The “Mafia’s” low-tech lifestyle is being subjected to a flurry of high-tech fact-checking. (Can you resist reading an article called ”Amish Mafia makes toilet mistake”?)

Will anyone else care, or are these worries about television toying with truth merely relics of the quaint Quiz Show era”Pontius Pilate yelling at those damn kids to get off his lawn?

Anyone who cracks the “how fake is too fake?” formula will possess the reality-TV equivalent of the recipe for Coke”or more accurately, its zillion-dollar successor.

Besides “racist,” I also get called “Canada’s Ann Coulter” fairly often, and it would be great if I had her money and her hair. We do share the same TV viewing habits, however; according to her latest, very out-of-character column, she is as “bored” with the news as I am, and is “watching only True Crime TV shows and Turner Classic Movies.”

Wow, it’s like looking in a mirror”I mean, a 40-inch plasma flat screen.

T. S. Eliot wrote that “Mankind cannot bear too much reality.” How much reality TV we can handle remains to be seen.