Under the White Flag

Too Sensitive For Our Own Good 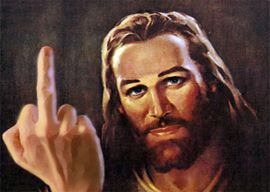 What kind of society touts free speech and then shuns dissenters who dare to speak about “sensitive” issues?

In today’s politically correct environment one is expected to be at ease with genders, races, religions, and political viewpoints other than their own. Yet there are certain hypersensitive no-go areas that people are obliged to avoid as a matter of course. It’s important that we share each other’s experiences and resolve our differences, but how do you expect anyone to be comfortable with foreign people or ideas if they cannot be made light of or spoken about freely? When in history has making people uptight served to relax them?

Humor is a time-honored way of broaching a delicate subject. But somehow we”ve come to a point where humor is forbidden when it comes to serious topics such as the Holocaust or Muhammad. It is hard to imagine why someone would want to make jokes about the extermination of any great number of people, but sometimes humor is the only means we have to process an unconscionable idea like genocide or to deal with a religion we do not understand.

“Making a big deal out of a flippant comment is just as silly as making such a comment.”

In today’s often hostile environment, a quick glance at the daily headlines reads like a page from the diary of an exceedingly disturbed individual, so why admonish people for trying to make light of things? Nonetheless, it happens constantly. Obviously, a normal person should have no trouble avoiding a Mel Gibson-styled meltdown. Only an inebriated fool carrying a giant cross on his back would start railing about Jews in the heart of Malibu. Gibson’s crackup might be funny to some people, but tirades like his don”t amuse anyone for very long. What I don”t understand is why anyone took him seriously. We cannot take everything to heart. Stupid people say stupid things, and it’s stupid for smart people to get upset about it.

In a less-deranged pronouncement, last week the film director Lars von Trier jokingly called himself a Nazi sympathizer and was expelled from the Cannes Film Festival as a result. I will assume he was using the term to refer to something other than a desire to see Jewish people exterminated. He was making a joke”obviously, a bad one. Nevertheless, expelling him from Cannes seems excessive. He’s nothing more than a second-rate film director. Making an example out of him makes the Cannes Film Festival look more like an award show for kindergarteners than a symposium for serious filmmakers. Making a big deal out of a flippant comment is just as silly as making such a comment. Furthermore, shunning someone for a few misspoken words goes against our culture of empathy and sends a message of intolerance, which is everything we are fighting against in the West.