Toward a More Diversified Diversity 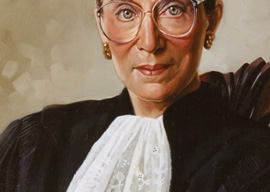 Ginsburg presumably has a similar type of knee-jerk camaraderie in mind in how she intends to put females to work. She would like to see the diversity pieces all serve the same ideological purpose as the one that shapes her life. The outspoken justice apparently would like to stack the court with official women like her, and not merely with well-trained jurists who match her gender.

Why should we think that an all-female bench would represent a qualitative improvement over earlier courts? The PC answer is that “it’s more inclusive.” But if we believe that the addition of women to the court “enriches” us by putting into a once vacuous or monochromatic entity more of what wasn”t there before, why stop with women, blacks, or Hispanics? Surely there are other groups that continue to be “underrepresented” on the court, just as Jewish liberal activists seem to be in noticeable oversupply there. How many self-declared bisexuals have sat on that august body? What about people with various trendy handicaps such as paraplegics or the non-sighted? (I think that’s what blind people are now called.) We”re hardly reaching into the diversity barrel when we try to accommodate the feminist lobby. If we rush to fill the Supreme Court with Kagan clones, won”t we be closing the door to the possibility of providing a more diversified diversity?

Why are people such as Ginsburg paid fortunes to say patently stupid things? Some of the silliest intellectuals in this country are paid tens of thousands of dollars to recite drivel that in a less media-driven culture would put to shame anyone with a room-temperature IQ. Ginsburg is neither witty nor eloquent, and she wears a sourpuss that would turn off anyone but the most over-the-top feminist. For almost sixty years I have known a lady who studied with her at Rutgers Law School and who would swear on a stack of Bibles that her teacher is endowed with the greatest legal mind of all ages. Ginsburg may possess more acumen than I”ve noticed, yet everything I”ve heard from her mouth is at least as banal as the speech she gave at Maria’s gathering and which from all accounts brought down the rafters with applause.

The feminist justice has reportedly suffered from both colon and pancreatic cancers. I wish her well in battling these diseases, but if the mention of her illness is an attempt to explain away her rhetorical emptiness, it won”t work in my case.