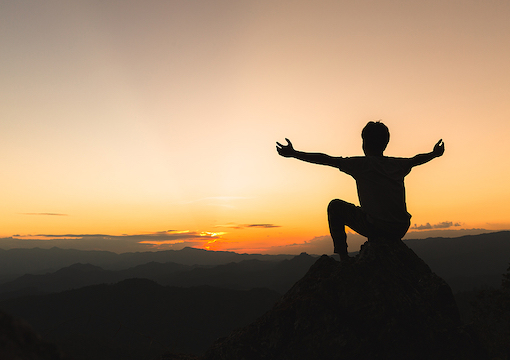 Humans are believing machines. It is the instinct of most people to accept what they hear without proof, as long as it comes from a source of authority or trust. If a friend tells you about a new restaurant, you just accept his opinion, even if you do not share his tastes in food. If the government tells you to eat less fat, you are inclined to believe it, even if you know that fat is good for you and carbohydrates will make you fat.

This willingness to accept things without proof from trusted sources is one of modern man’s oldest traits, probably coevolving with language. It makes sense that language and belief would evolve together as they depend on one another. You cannot have even a primitive set of rules without a way to communicate them to others. Similarly, the desire to share beliefs about the world would drive the evolution of language.

Belief and language make it possible to containerize complex ideas. A story about a scary monster the gods chained up in the forest is a good way to keep people, especially children, out of the forest. A detailed explanation of the risks that lie inside the forest is not very interesting. Stories are easier to remember, and stories about the supernatural are much more compelling.

“Left-wing people really need to believe, and they will believe in just about anything.”

This is why the supernatural is a universal presence in human society. Even the most primitive people have beliefs about what lies beyond the material world. The gods and spirits help people make sense of the world. The selection pressure within human society is going to favor those who accept the beliefs of the society. The doubters will be marginalized and maybe even boiled off over time.

The old chestnut about people who believe in nothing falling for anything rings true to most people because of this. The instinct to believe is always there, even when it is not channeled into something useful like organized religion. Those people smugly denying the existence of God always sign on to left-wing fads, because their instinct to believe in something has to find an outlet, so it is some nutty cause.

The obvious example is the Covid panic. You are more likely to know someone who was mugged or hit by a car than to know someone who died of Covid. When it comes to plagues, Covid is a minor event, but it is treated like the Black Death. No one panics over muggings, car accidents, or other things that can kill you. Even the most sober-minded, however, worries about Covid, because we cannot see it and for most of us it exists only in the abstract. There is a supernatural quality to it.

Like most human traits, belief operates on a spectrum. This is why the hardest-thumping Covidians are on the political left. Left-wing people are much more inclined to accept authority than people who tend to be on the right. It is why the overlap between progressives, Covidians, and Gaia worshippers is near universal. Left-wing people really need to believe, and they will believe in just about anything.

Paul Gottfried touches on this tangentially in his recent book, Antifascism: The Course of a Crusade, in which he explores antifascism. Professor Gottfried knows more about fascism—the actual political movement—than anyone alive. Naturally, he knows a tremendous amount about the various movements that have opposed it. He correctly points out that modern antifascism is complete nonsense, divorced from reality, but the modern antifascist believes it with the intensity of a fanatic.

An example of this is in this recent post in The Guardian by Jason Stanley, a philosophy professor at Yale University. Professor Stanley believes he is part of a war against fascism, a thing that has not existed for seventy years. He believes this so deeply that he now claims that Donald Trump is Hitler. That is like claiming Frosty the Snowman is the secret leader of the Ku Klux Klan.

Professor Stanley is not unique. There are a lot of crackpots who think they are part of a war against an invisible army of Nazis. They believe it because they are told this by people in authority. Government officials and their marionettes in the mass media regularly tell us that Nazis are hiding behind every bush. Easily suggestible people like Professor Stanley believe it because they are prone to believe. His private war against the invisible Hitler scratches his itch to believe in the supernatural.

One reason this age seems to be plagued by crackpots like Professor Stanley is that we have loads of people conditioned to believe, but we lack a sensible belief system to provide them with the necessary structure. Christianity has collapsed and into the void has flowed one whack-a-doodle belief after another. As a result, we are being overwhelmed by lunatics with heads full of nutty beliefs.

The great question in this age of disbelief is not how to get people to stop believing in crazy things but how to get them to believe in productive things. Imagine if the Covidians suddenly focused on fixing potholes with the same zeal they have for wearing masks and getting booster shots. Imagine if Professor Stanley had the same enthusiasm for solving practical problems that he has for invisible Nazis.

Of course, no one has an answer for this, which is why we are plagued with unbalanced lunatics like Professor Stanley. Covidians are now flooding our hospitals because Covid gives meaning and purpose to their lives. Coming up with a new religion and then convincing people to follow it, rather than these weird causes, is no small thing, but Christmas is a reminder that this is not without precedent.

It is a necessity of society that the people have a shared sense of reality. What we call culture or common sense is just the shared understanding of reality. This crying need for a new shared set of beliefs is either filled with some new religion, or we break apart into separate tribes. People need to believe. That is universal, so we are either on the verge of a new religion or at the cusp of great disaggregation.