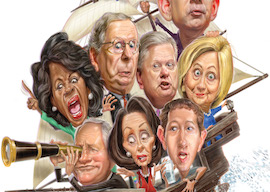 Shortly after this month’s election, an Antifa mob descended upon the Washington, D.C., home of Fox News personality Tucker Carlson, his wife, and their four children, chanting, “Tucker Carlson, we will fight. We know where you sleep at night.”

Why all the hate for Carlson? For example, Matthew Yglesias of Vox endorsed the intentions of the leftist goon squad who terrorized Mrs. Carlson into locking herself in the pantry.

One reason is because Carlson, who has bumped around conservative journalism and cable news since the previous century, has hit his stride since taking over a nightly prime-time hour on Fox in November 2016. Carlson regularly contends with Rachel Maddow of MSNBC for the second-best ratings in all of cable news, behind only Sean Hannity.

At age 49, Carlson is in his prime and is likely to stay there for quite a while. Like Pat Buchanan, he’s genial off camera and a tiger when the red light turns on. He’s starting to run into the Ali G problem that top PR advisers have now heard he’s trouble for their clients, so he’s getting sent mostly second stringers to thrash.

Moreover, he’s brought to the often ossified world of cable news a relatively fresh perspective that had previously largely been kept out of the mainstream media, if I say so myself.

Carlson, a rich kid from La Jolla, isn’t a populist outsider by upbringing or personality. His father was a Republican ambassador and his stepmother was an heiress and a niece of Sen. William J. Fulbright (D-AR), a leading insider opponent of the Vietnam War. A witty man, Carlson seldom pretends to be anything other than a member of the elite he insightfully criticizes.

“I have no idea how Carlson creates five hours of television per week and writes a book at the same time, but Ship of Fools is quite good.”

The funny thing is that Carlson, a lifelong Republican, has drifted leftward on economics and foreign policy in recent years, as seen in his new best-seller, Ship of Fools: How a Selfish Ruling Class Is Bringing America to the Brink of Revolution.

Carlson, who voted for Ron Paul in 1988, has largely left behind his youthful economic libertarianism. For example, he now asks:

Why do we tax capital at half the rate of labor?

The central theme of Ship of Fools is that the convergence toward the reigning elite consensus of economic conservatism and social progressivism is better for the people at the top of society than for maintaining a stable middle-class democracy:

The marriage of market capitalism to progressive social values may be the most destructive combination in American economic history. Someone needs to protect workers from the terrifying power of market forces, which tend to accelerate change to intolerable levels and crush the weak.

Companies can openly mistreat their employees (or “contractors”), but for the price of installing transgender bathrooms they buy a pass. Shareholders win, workers lose. Bowing to the diversity agenda is a lot cheaper than raising wages.

Carlson supported the Iraq War in 2003, but by 2004 was apologizing, saying, “I think the war in Iraq was a major mistake.”

Carlson’s book is particularly derisive of neoconservatives who didn’t learn from that disaster, such as Max Boot, Robert Kagan (who “seemed like an aging linebacker with a history of concussions”), and his old boss at The Weekly Standard, William Kristol (who has just now called for America to plot “regime change in China”).

The signature characteristic of America’s foreign policy establishment, apart from their foolishness, is the resiliency of their self-esteem.

Ship of Fools is full of appreciations of liberal heroes of the 20th century, such as Ralph Nader, Frank Church (the Democratic senator who helped bring the American deep state under some degree of legislative control in 1975), and farm labor leader Cesar Chavez (a fervent opponent of illegal immigration).

FDR receives a tribute for his Civilian Conservation Corps, which provided healthy, prideful hard work to many unmarried young men. Carlson then acidly observes: “It would be denounced as irredeemably sexist today.”

A fly fisherman, Carlson is happy to admit that 1970s environmentalists did wonders for cleaning up polluted rivers. And, he points out, the famous 1971 “crying Indian” TV commercial persuaded Americans to be ashamed of littering.

Today, however, environmentalists have lost interest in down-to-earth issues like littering and would never dream of being so racist as to try to shame picnicking illegal immigrants into picking up their used disposable diapers. Now when Carlson goes fishing in the Potomac, the water is clean but the banks are filthy.

Carlson is struck by how many 20th-century progressive shibboleths have been forgotten as the long march through the institutions has triumphed:

The majority of journalists and intellectuals in 1975 would never have accepted the lame excuse that silencing, firing, and ruining people for holding an opinion was fine, as long as it wasn’t specifically the government doing it. They would have declared that a free society depends above all on free minds.

He’s likewise old enough to notice how humiliating it ought to be to contemporary intellectuals that they feel obligated to praise the intelligence of Ta-Nehisi Coates:

‘Between the World and Me’ is an unusually bad book: poorly written, intellectually flabby, relentlessly shallow, and bigoted. No honest reader with an IQ over 100 could be impressed by it. One presumes that the moment America wakes up from its current fever, Coates’s memoir will be forgotten immediately, an embarrassing relic from an embarrassing time.

I have no idea how Carlson creates five hours of television per week and writes a book at the same time, but Ship of Fools is quite good. It’s currently No. 3 on the nonfiction best-seller list, behind Michelle Obama and Bill O’Reilly. His prose style is simple and clear, which is helpful because the density of his ideas is rather high. It’s not a large book at 244 pages, but it might take longer to read than you expect.

Interestingly, despite his clarity of expression, almost nobody has noticed Carlson’s growing ideological centrism. But that’s because what matters most to contemporary intellectuals is not policy but keeping the alliance of the margins together by blaming straight white males. And Carlson is the exemplification of straight white maleness.

Yet, as he writes:

At the moment, the coalition of identity groups has held together because it is united in a single purpose against white male power. But rapid demographic change makes this unsustainable. When the traditional scapegoat becomes insufficient, various factions will turn on one another.

Still, Tucker Carlson will likely be around for quite some time to drive mobs into further rages with his honesty and wit.