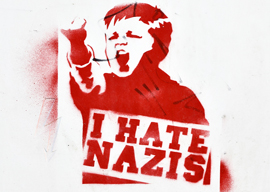 “After celebrating the 70th anniversary of Jackie Robinson breaking the color barrier in April, baseball was just reminded of how far it still has to go,” claims the Huffington Post after Baltimore Orioles center fielder Adam Jones claimed people were calling him nigger. What a pile of horseshit. If a fan yelled that word from their seat at a baseball game, the only people not attacking the guy would be busy having a stroke. A quick check-in with people who were at the game confirms our suspicions. Jones is just another social justice warrior feeding off the myth that America is a racist hellhole. When the San Francisco 49ers” Colin Kaepernick was all over the news last year for taking a knee during the national anthem, Jones jumped on the bandwagon, claiming he goes through similar pain because “baseball is a white man’s sport.” This got traction despite the fact that one in four pro baseball players are born outside the U.S. and a good third of all players are Hispanic.

It’s especially sad to see PC infect sports because it’s one of the few meritocracies we have left. If you can throw a baseball over 100 mph, you”re in. You don”t even have to speak English. Fans want their team to win and they could care less what race someone is. They don”t even care if he beats his wife. Football and baseball are brimming with domestic abuse perps who live above the law, and a shocking percentage of them are black.

Richard Spencer tried to inject race into sports when the New England Patriots won the Super Bowl and he declared it a victory for white people. Their quarterback is Trump supporter Tom Brady, who may be the whitest athlete in history. Race racketeer W. Kamau Bell brought this up when he interviewed Spencer for the CNN show United Shades of America. Bell said the player who won the winning touchdown is black, which I thought was a valid point. Unfortunately, he said that in the VO before the interview. The discussion itself was just Bell giggling like a schoolgirl and kissing Richard’s ass, which is what all amateur interviewers do when they want things to go smoothly. It ended up being an ad for the alt-right that likely brought them hundreds of new followers. Spencer said he wants to “bathe in white privilege” and thoroughly enjoys everything about his race. Kamau tittered and swooned the way affirmative-action hires tend to do, but later penned an article claiming, “The alt-right is working hard to cloak its desire to create chaos in the streets as free speech,” and “ I”m not afraid of these people or Richard Spencer’s ideas, because I know my ideas will win. My ideas are better.”

What ideas is he talking about? The idea that America has a dangerous underpinning of racism that threatens us all but will ultimately die before it gains any real momentum? Kamau works hard perpetuating these myths because they are his bread and butter. He claims being mistaken for a homeless man and having kids touch his daughter’s hair are proof we are living in racist times. Instead of shaming the cafÃ© that made this mistake, why not get mad at all the homeless black men who look exactly like him and created this stereotype in the first place? The employee was trying to protect patrons from annoying bums who hurt his boss” business (which he was summarily fired for). As far as his daughter’s Afro being touched, sorry, it’s unusual to have an Afro at a predominantly white school. That interests kids. When I lived in China, kids were always grabbing my leg hairs and drawing me with fur. They weren”t used to body hair. Telling your daughter that’s some kind of racist abuse is wedging damaging dogma where it doesn”t have to be. It’s borderline child abuse. Racial hatred from the right is a fairy tale created by paranoid Marxists who are obsessed with the idea that a new Nazi party is lurking around the corner.

Here on Earth, it’s very difficult to find examples of far-right violence. Studies twist data pretzels to try to prove otherwise by calling such incidents as a Muslim massacre in Fort Hood and a jihadist beheading in Oklahoma “workplace violence“ while pretending Dylann Roof had any kind of right-wing relevance. They knowingly ignore political violence from the left while blowing up potential violence from the right like it’s proof of America’s new Nazi movement. Bell is especially naive about this and claims that “when media sources say, “Berkeley is rioting,” I know that “Berkeley” isn”t rioting.” That’s right. The fires and destruction we saw at Milo Yiannopoulos” talk were a few bad apples bused in from out of town. What we really need to be scared of is the right. Antifa are just kids trying to defend themselves from hate. Never mind the knife-wielding member in Austin who answered their call to attack frat boys by stabbing four (one died from his wounds). Let’s ignore the Antifa-linked Berkeley mayor who ordered his cops to stand down so violence could thrive. The real threat is the N-word because it’s quickly followed by Hitler.