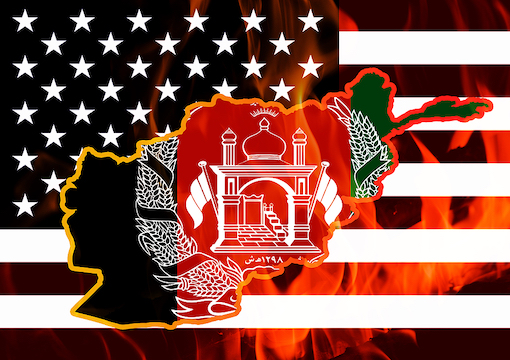 In the world where most people live, failure is usually followed by consequences like termination, bankruptcy, or the loss of reputation. A salesman who fails to close the big deal not only loses out on his commission, he also gets replaced. The company that keeps making defective products or products that have no market appeal eventually runs out of money and goes bust. This is how the world works.

That is the world of the dirt people, the peasants, the peons. In the world of the beautiful people, the cloud people, failure rarely has any consequences. Take the looming collapse of Afghanistan, for example. The American empire has been trying to make something of that dung heap for twenty years. The official figures say the empire spent billions, but we know that is a lie, of course. The real figure is in the trillions.

The empire constructed beautiful facilities like air bases, supply depots, and communications systems. They also designed and built an army to defend the government they created to run the place. Those highly trained Afghan troops are now stripping off their snappy new uniforms and running for the hills. Most are hoping to get a visa to the empire so they can move into your neighborhood.

“Reality is that thing that does not go away when you stop believing in it.”

According to regime media outlets, the American embassy is now in the “burning documents” stage of preparation. According to the report, “Kabul could be isolated by the Taliban within the week, possibly within the next 72 hours.” Given that the Taliban has proven to be much smarter than the whiz kids of American foreign policy, they will no doubt allow their opponent to save some face and escape the city.

You see, next month is the 20th anniversary of 9/11. This is an important date for the Taliban, as it is when they stepped onto the world stage. What better way to celebrate the platinum anniversary of that event than to raise the Taliban flag atop the U.S. embassy on 9/11? That may seem a bit spiteful, but when you have just humiliated the lone superpower, you deserve to celebrate the occasion.

For its part, the foreign policy establishment seems to be in a state of hysterical confusion over this. They assumed the military refused to bugger out of Afghanistan when Trump ordered the retreat because they hated Trump as much as the rest of the cloud people. After all, who does not hate Trump? Now that the evil orange man is gone, it was time to get out of Afghanistan. What could go wrong?

It turns out that the military knew it was a house of cards. After all, it was their job to build the thing. It was their job to create the civil institutions that would become the cultural production centers, crowding out the old culture. They trained the military to defend those new institutions. The Afghan military would be the new model army for the region, built on the same principles as the imperial army. Instead, it has collapsed.

In the dreaded private sector, this degree of failure would result in the termination of the senior staff and a bankruptcy reorganization. That assumes anyone would think there is something worth salvaging. Anything created by the stupid people responsible for Afghanistan should be suspect. That is not how things work in the ruling class. The best part of being a cloud person is you never are held responsible for your actions.

Instead, the military brass will point the finger at the civilian side. They will say their hands were tied over political concerns. If only they were free to drop even more ordnance on the villages dotting the countryside, they could have whipped that ragtag band of goatherds. Of course, this will be followed with new requests for cash, accompanied by cheers from conservatives hoping to become relevant again.

For their part, the geniuses who thought it was a good idea for the empire to invade a place nicknamed the “graveyard of empires” will blame the politicians. This is a favorite game of the imperial bureaucracy. The billionaires who underwrite the operation can always hire new actors to play the democracy game. The point of democracy is to have someone to blame when the people in charge need a scapegoat.

The big challenge they will have is figuring out how to blame this on Trump and the evil minions who tried to overthrow democracy. Currently, that is the answer to all problems facing the glorious revolution from the top. Team Biden made a big show of owning the Afghan retreat, so blaming Trump is not going to be easy. You can be sure they have their best transgender BIPOCs working the problem.

They will get full support in this effort from Conservative Inc., who will seize on this embarrassment as a chance to regain some relevance. They will say the Taliban waltzed into power because Biden is weak. If they were in charge, we would be in Afghanistan forever! Then they will wave some tiny American flags, mumble something about 9/11, and hope that works on the mouth breathers who vote Republican.

It is a sad and predictable fiasco, but it is not without some sunshine. When the Red Army was run out of Afghanistan in 1989, it was a body blow to the Soviet empire, which collapsed just two years later. The military was the last intuition the people respected, so when it was humiliated, the system was humiliated. The last pillar holding up communism broke, and the system collapsed.

The sight of the Taliban dancing on the roof of the American embassy in Kabul will be a bitter pill for white Americans. They supported the war on terror. They sent their sons and husbands off to fight these wars. To see it was all just a big lie, maybe the last big lie, from people who hate them, will crater respect for the military. With it will go the last reason for anyone to remain loyal to the system.

Reality is that thing that does not go away when you stop believing in it. The reality in this case is that failure has consequences. The cloud people believe they have somehow escaped this bit of reality. They can keep staggering from one screwup to the next, never having to pay a price. In reality, this screwup just moved them one giant step toward facing the ultimate accountability.