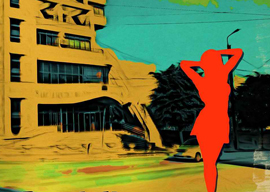 In 2005, a microbiologist from Maryland started a humble blog dedicated to his exploits in Washington, D.C.’s notoriously rough dating market. The blog was titled, appropriately enough, DC Bachelor. Nearly a decade later, said blogger goes by the name Roosh, he no longer lives in D.C., and he’s become one of the Internet’s most respected”and infamous”writers on masculinity and seduction. Roosh’s Bang textbooks, which teach men to improve their skills with women, have brought him great financial and critical success, while his sister site Return of Kings has inspired the wrath of feminists worldwide with its unapologetic defense of traditional masculinity and values.

It’s in this spot that he’s published his latest memoir, Poosy Paradise.

The title comes from a Danish talk show where the panel members (discussing Roosh’s book Don”t Bang Denmark) were unable to translate his phrase “pussy paradise” into their own language. Pussy paradise is the goal of all men, a land where vaginas grow on trees, women are faithful, and love is simple. No Tinderfessions, no bizarre head games, just a never-ending river of easy, affectionate vaj.

“To the dismissive-avoidant Millennial, sex carries no more gravity than a bowel movement.”

Poosy Paradise represents yet another metamorphosis in Roosh’s long climb from anonymous grinder to Kwisatz Haderach of poon to wizened mentor for young men worldwide. It details his two-month visit to Romania a year ago, as he picks up local girls and deals with his newfound fame. Whereas scoring was once a cause for celebration, now it’s just part of the job. Whereas Roosh used to be disappointed when a relationship didn”t work out, he now accepts it as a fact of life. He’s cracked the female code as assuredly as a clockmaker knows clocks; all that’s left is to wind “em up and watch “em tick.

This is where the usual suspects come in: “AHA! Being a cad isn”t all it’s cracked up to be!” Maybe it isn”t, but I prefer to get my opinions of war from soldiers on the front line, not pants-pissing REMFs.

As much as we can criticize sexual promiscuity and sluttiness, at least the generations who came before us had fun. People formed real connections and had real escapades, the kinds of experiences that build character and make people interesting. But there’s no drama or excitement for my generation, just pointless, mechanistic stimulation. Even calling it “hedonism” is a lie, because nobody my age truly enjoys their lives. To the dismissive-avoidant Millennial, sex carries no more gravity than a bowel movement.

That’s what Poosy Paradise“and Roosh’s work in general”captures: the no-win scenario of modern dating. You can be the “beta male” chump earnestly seeking love and finding nothing, right up until you turn 30 and your same-age cohorts come down with baby rabies. You can throw yourself into the Tinder culture with aplomb, giving up on anything resembling an emotional connection with the hotties you bang. You can become like Roosh, a “love tourist” plumbing foreign lands for a woman you can love, but even those countries are being assimilated into the American Borg, where men are nothing but clowns to entertain women in between bouts of Tweeting sex selfies.