Two Sweeps Over the Limit 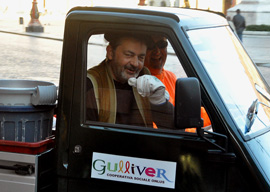 You do not need to look at the statistics to understand who has traffic accidents and why. Alcohol alone does not cause accidents unless a driver is hog-whimpering drunk. At least one other factor is also required and in high doses: testosterone. This explains why young men under 30 have the most accidents. Their high testosterone count and invincible belief that their youth is a shield against death”turbocharged by a few cans of beer”cause them to drive too fast and very badly.

There are other vital factors at play: luck, chance, destiny, Satan, and all that jazz. But there is nothing a man, whatever his age or testosterone count, can do about such stuff. Here is the solution: Keep the current drunk-driving law for men under 30, but introduce another much more flexible and civilized new law for men over 30.

I drive much more competently after a few glasses of red wine because I feel far more at ease with the world and far less contempt for other people. I know this because I no longer drink. In August 2011, I gave up alcohol for unrelated reasons: I could not stand what it had done to my face and physique. But I have noticed that nowadays, I drive much more aggressively and dangerously when I”m stone-cold sober than I ever did as a seasoned “drunk” driver. These days, I hoot everything long and hard with my Defender’s extremely loud horn and make obscene hand gestures even at old ladies who get in my way.

The Italian state defines the purpose of “socially useful” work as “reeducation””a euphemism that used to be bandied about only in standard communist regimes. But then what is political correctness, which is as rife in Italy as anywhere, if not the application of communist dictatorship to the mind rather than to the means of production?

There is no way anyone is going to reeducate me, however many hundreds of hours they condemn me to being socially useful if by that they mean forcing me to sincerely accept that what I did was wrong. What I did was against the law, a law that I think is unjust, and I got caught by a cop called Mussolini. That is all. This reeducation by road-sweeping is merely a punishment that deprives me of my time and my earnings and involves me being humiliated in public. It is a modern version of being put in the stocks and pelted with rotten vegetables. It is possibly a deterrent against reoffending, though I would not bet on it and it is most definitely a fantastic money-spinner for the company under whose supervision I toil, a left-wing “not for profit” cooperative that enjoys a whole raft of tax breaks. This cooperative pays nothing to those sentenced to reeducation by road-sweeping such as me but instead gets paid to take us on. Not once, but twice: first by the court, then by the council. Imagine if such a system that transformed wages from a cost to a profit operated everywhere. No doubt the Chinese are already working on it.

I am no stranger to manual work. I once, for example, strangled geese with my bare hands for a living on an English farm. And I rather enjoy being a road-sweeper. It gets me out in the fresh air and away from the computer. It compels me to do one hell of a lot of something I have hardly done for years: walk. It is a bit like doing a stint at a health farm, not that I have ever been inside such a place. I also get to wear a manly bright orange and luminous jacket and trousers and they allow me to keep my black Basque beret. The jacket in particular causes women to look at me in a certain way they normally do not. The other morning my Italian mother-in-law told me: “Quel giubbotto ti dona, sai, ti dona, sul serio.” (“That jacket gifts you, you know, it gifts you, seriously.”) Even my wife called me “mio uomo“ when I came home in it after my first six-hour shift and the kids buzzed about squealing: “Sei proprio bello, papÃ !“ But it is not a job I would recommend to psychopathic perfectionists such as Adolf Hitler or Lieutenant Colonel Nicholson in The Bridge on the River Kwai. ForlÃ¬ is not Naples but as a road-sweeper you cannot do a perfect job wherever you are. And cleaning up other people’s carelessly discarded rubbish makes you keener still on dealing with them in the required fashion once and for all. Or as the Italians say of their useless and corrupt politicians: Di fare piazza pulita. (“Make a clean sweep.”) Road-sweeping is a job best left to poets and dreamers. So I sweep on.