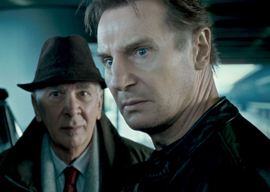 Playing American academic Martin Harris, the 58-year-old Neeson arrives in Berlin to attend a biotech conference with his young blonde wife (former fashion model January Jones, just as vapid in Mad Men as Mrs. Don Draper). But he forgets his ID and cell phone at the airport. Then his cab, improbably driven by a beautiful Bosnian blonde (former fashion model Diane Kruger, who was Helen in Troy), goes off a bridge.

Awaking after four days in a coma, Professor Harris is surprised that his wife hasn”t contacted the hospital. He’s even more poleaxed when he finds her checked into the hotel with another perfectly plausible Professor Martin Harris”Aidan Quinn of Desperately Seeking Susan, who was a bigger star in the late 1980s than Neeson was.

(Quinn, born in Chicago to Irish parents, has a vastly better American accent than Neeson, a Northern Irish Catholic. Why do filmmakers torture Neeson, who can sound majestic with his British Isles accents”such as the leonine Aslan in Chronicles of Narnia“into gargling up that strangled-sounding mid-Atlantic intonation? What’s wrong with a tough guy sounding like he’s from Ulster, a region that has produced many a formidable fellow?)

The puzzled German officials politely suggest the confused and depressed intruder get another brain scan. Then a kindly nurse puts Harris in touch with a private eye, a former East German spy played by the 79-year-old Ganz. The Swiss actor, who was an angel in Wings of Desire and a demon in Downfall, swaggers on-screen with a look that says, “Yeah, it’s me, I”m that guy: the one in all those hundreds of YouTube parodies of Hitler’s temper tantrum.”

In this age of cellphones and Internet, Unknown‘s plot mechanics sound implausible. Still, at a conference abroad I once managed to lose track of a family member, and just like Ganz’s character, a local private detective used his old secret police contacts to figure out what had happened. Therefore, I could identify with Prof. Harris’s confusion and dismay, especially because Neeson looks a bit like the movie-star version of me”same height, but six inches broader in the shoulders.

Yet even I don”t want to see Neeson act like me. And that’s why, although Unknown is a better movie than Taken, it won”t make as much money. Audiences prefer alpha males.