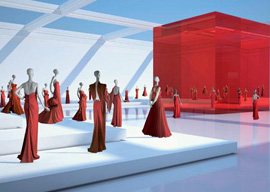 Long before a well-known French shoe designer immortalized women’s feet with red soles, the red Valentino dress had deified the women who wore them for several decades.

Renowned couture designer Valentino Garavani practically had “red” named after him. “Valentino Red” is a source of reference among those in the know. According to the designer, the inspiration came to him when he was 18 at a Barcelona theater. The opera was La Traviata and everything he saw was red, from the theater’s interior to the flowers to the dresses. He decided it would be his signature color.

For roughly five decades, Valentino has been creating some of the world’s most exquisite clothes. A serious wardrobe, the likes of which women such as Jackie Onassis or Elizabeth Taylor possessed, always has one of his dresses among the heap. All the most glamorous celebrities, socialites, and grande dames have worn him. He is up there among the greats with Dior, Saint Laurent, Chanel, Balenciaga, and Schiaparelli.

“If only more people took their cues from Mr. Valentino.”

Four years ago the Italian designer announced his retirement. His company had already been sold for almost a billion dollars. But his work continues online. Garavani and his longtime collaborator Giancarlo Giammetti launched the Valentino Virtual Museum late last year. While the concept might not mean much for people who don’t care about clothes or for whom women’s fashion holds little meaning, Valentino’s Virtual Museum is as worthy of admiration as any other exhibition room. It is the first of its kind, and like Valentino himself, rather exceptional.

Unlike a traditional museum, the VVM is not a traveling exhibit or a museum one must travel to visit or queue up to buy a ticket. The VVM is an easily downloadable show with free access for all. The museum has the added benefit of feeling like a private tour where one can languish on any piece uninterrupted. Valentino’s Virtual Museum provides a sweeping glimpse not only into the designer’s style and his most innovative achievements, but more importantly into the evolution of style between the 1960s and the 21st century.