Valhalla for the Inarticulate 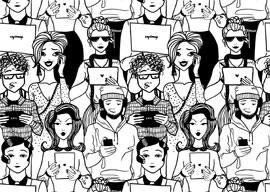 Cicero was a wise human being who wrote that a man with a garden and a library has all he needs. He also said that only a man without a brain Tweets. (Well, he would have said it were he around today.) The Oxford philosopher John Gray, a man I used to get drunk with until he gave up the sauce, insists that the pursuit of distraction has now been embraced as the meaning of life. Gray knows what he’s talking about. In his latest book, The Silence of Animals, he portrays man as a desperate creature who twists and turns to avoid acknowledging that he, too, is an animal. The Ancient Greek philosopher Taki calls people that Tweet and spend their time on Facebook the closest thing to subhumans. Cicero, John Gray, Taki”three great thinkers known for their silences and (I can only speak for the latter) not owning a mobile phone.

Yes, dear readers, one can no longer read a news report online without one hundred bilious and moronic comments following it. Everyone today has become a commentator, parading his or her idiotic and illiterate musings for the world to see and read. It seems that shame is a word no longer understood by the great unwashed”and even some who shower daily. A British reporter recently broadcast the actual recording of his vasectomy over the Web. What a pity his father didn”t have one before that particular slob came onboard.

“The ceaseless, unchecked sharing of opinions online is the logical endgame of a society no longer ashamed of anything.”

About forty years ago the great Tom Wolfe christened those awful yuppies the “Me” generation. It has gotten much worse since. It is now the me,me,me,me,me”and only me”generation. No one seems to be able to live without an audience, a paroxysm of narcissism with the Internet as its Valhalla. And what rubbish it is. People will post anything that pops into their Paris Hilton-like heads”the more banal, the better. I have never understood what Tweeting is; all I know is had Dante been around when it was invented he”d send the inventor to the tenth circle of hell for even greater punishment. Disguising their emptiness and ignorance with impudence, twenty-first-century Hemingways pose and preen on the screen, filling up cyberspace with rubbish. And don”t get me started on Facebook, whose concept has been explained to me by my son and daughter. Leave it to one of the world’s great slobs to allegedly steal the idea from two WASPy brothers and make the world an even lousier place than it is.

The urge to blab and spill one’s innermost secrets to strangers is more than weird; it’s sickening. It springs from a navel-gazing culture of narcissism that would have made even poor Narcissus blush. The shrill anonymous comments are typical of the posters” cowardice. One man in Britain threatened to rape a woman who led the campaign to have Jane Austen’s image put on a ten-pound note, but when the woman traced him, he apologized and begged her not to reveal his name. She did, and his picture appeared in the newspapers. He looked like the biggest wimp I”d ever seen in my rather long life. But he sure sounded tough while Tweeting.