Vegas Knows What to Do With a High Roller 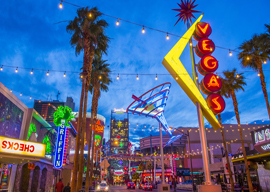 PALM BEACH, Fla.”Hunter S. Thompson used to mail me giant photos of objects being blown to smithereens with dynamite or flung from some kind of skeet contraption so they could be exploded midair, and in most cases he was both the photographer and the destroyer. He would scrawl the precise date and time of the explosion on the bottom of the photo and copy it to the sheriff of Pitkin County, Colorado, who had repeatedly warned Thompson that he was in possession of illegal military ordnance, that he was in violation of pyrotechnic laws, and that he was in imminent danger of jail. As a Second Amendment radical, Thompson wanted to document exactly when, where, and how he had violated the law, then dare the law to do something about it. To me he would just write, “I”m on it.”

I tell this story to people who sometimes question the great Ur-text of gonzo journalism, Fear and Loathing in Las Vegas, disputing whether Thompson really did disrupt the National District Attorneys” Association Institute on Narcotics and Dangerous Drugs while bugged out on mescaline, blotter acid, cocaine, uppers, downers, screamers, tequila, rum, beer, ether, and poppers.

He really did. He may have written it down later, when he was more lucid, but tromping all over the legs of district attorneys who had gathered at the Dunes to discuss how to hunt down deviates just like him was, in my opinion, one of the transcendent moments in American reporting.

Which is why, if you”re going to write a book about Las Vegas and call it “gonzo,” you”d better be ready to get down and dirty.

Aimee Groth went to Vegas to write what she calls “gonzo journalism””in fact, according to her publisher, “fearless gonzo journalism””without carrying the tool kit. She needed a stick of dynamite and a bazooka for targets that were huge and inviting, but ended up approaching them like a Vassar coed writing a sociology paper on sexual harassment.

Her book is called The Kingdom of Happiness: Inside Tony Hsieh’s Zapponian Utopia, and it describes a journalism project that was kind of doomed from the start. In 2013 Groth quit her job as an editor at Business Insider in New York in order to immerse herself in the hipster commune”cum”start-up accelerator”cum”urban renewal project”cum”weirdbeard performance-art scene known as the Las Vegas Downtown Project, initiated by Zappos.com cofounder Tony Hsieh, who believes that life should be based on the Ten Principles of Burning Man. Hsieh is one of those Silicon Valley capitalists who believes life is an extended version of summer camp, so even though he’s well into his 40s, he’s still collecting merit badges.

He constantly spouts “better living” bromides normally not heard outside Deep South sports arenas and feel-good megachurches, including ideas derived from self-help books, positive-thinking books, management-theory books, the rave code (Peace Love Unity Respect), the Aspen Ideas Festival, the culture of SXSW in Austin, the wisdom gleaned from Silicon Valley’s sacred mountain in Eden, Utah, where Summit Series gurus dwell, the Electric Daisy Carnival, Further Future…and I hope I haven”t left out any of the other gatherings where people live in luxury yurts and ingest psychedelic Molly crystals while dancing in animal costumes. I don”t know if they have a name for this mindset in Silicon Valley, but I would suggest Nirvana Aggregator.

All of this would seem to be incredibly fertile gonzo grist, were it not for the author’s fatal flaw: “I was inspired by his vision and was willing to follow him anywhere.” She was dazzled by Tony Hsieh’s personality and his vision for downtown Las Vegas, even though she never tells us quite what was so compelling about it, and so she lost her gonzo credentials right away.

Tony Hsieh”in case you missed him at last year’s Coachella fire installation”is a Taiwanese-American who became a multimillionaire at age 24 when he and his Harvard digi-mate cashed out LinkExchange for $265 million during the dot-com boom. He rolled that money into a venture capital fund called Venture Frogs that invested in both Open Table and Zappos, the online shoe retailer that he built into a category colossus and then sold to Amazon in 2009 for $1.2 billion (apparently after Hsieh’s partner, Sequoia Capital, nudged him into an exit strategy). Hsieh had 38 percent of the Zappos equity but was having so much fun that he stayed on to run the company and, almost equally important, to preach the feel-good gospel of “delivering happiness,” which was the title of his 2010 book and national speaking tour.

“Happiness” is a huge deal with Hsieh. If you interview for a job at Zappos, you”re asked to give your “happiness number” between 1 and 10. (Important: Don”t say 10, they”ll know you”re lying.) Then you”re evaluated for a “culture fit” to make sure you party hard enough to be Zappos material. There’s no handbook for what the culture fit entails, but it apparently helps to have tattoos, unnatural hair shades, cargo pants, and Halloween costumes you”re willing to wear to the office. A fondness for Bikram yoga and the art of Japanese rope bondage works in your favor, but Republican political views do not. Zappos also has its Ten Core Values to match those of Burning Man, and you can be fired for a “values violation.” You also need to drink fernet. Everybody drinks fernet. I must admit that, even though I”ve splashed joyfully through several dozen of the world’s most exotic alcohols, I had never heard of it. It’s an Italian herbal liqueur. Hsieh apparently buys it by the container ship.

Zappos was originally based in San Francisco, but Hsieh moved the company to Vegas in 2003 because he loved poker and saw the city, as many other companies have, as prime recruiting territory for a call center. To hear him tell it, Zappos is the happiest place to work in the world, a permanent micro-rave where you”re free to do vodka shots at your desk or bring your Vietnamese pig to work. Hsieh has spent years installing a system of self-management called “Holacracy” in which job titles are eliminated and there are no clear standards for compensation, hiring, or promotion. It’s all about groupthink, or what a Belgian organizational guru calls “teal consciousness,” and the inner workings of the company are full of concepts like “serendipity,” “collisions,” “processing tensions,” “vulnerability sessions,” and various rah-rah concepts that are as old as Dale Carnegie and as battle-scarred as the Maharishi Mahesh Yogi but updated with terminology from The Matrix.

Hsieh’s big move came in 2012, when everything took a turn toward Thomas More. Hsieh announced that the principles of entrepreneurship, start-up culture, and Zappos-style happiness could all be applied to the endemic problems of big cities. What was needed, he suggested, was more “community,” the sort of community in which the individual is enveloped by the larger rhythms of the 24/7 rave. And what would be a better laboratory for that than the slums and abandoned buildings and vacant lots of downtown Vegas? The vanguard of the proletariat would be the Downtown Project, with Hsieh moving Zappos to the old City Hall building (after a $40 million renovation) and pumping $380 million into real estate and start-ups, because, “When you fix cities, you fix the world.”

This is the moment when Hsieh invited Groth to join him”oddly, as his “platonic date” at a wedding in Kona, Hawaii”and offered her “a blank canvas” if she moved to Vegas and chronicled the transformation of Sin City into a “creative capital” and “the most community-focused large city in the world.” For the next three years she would couch-surf up and down Fremont Street as the high drama of hipster idealism played out just two blocks from Room 1850 of the derelict Mint Hotel, where Raoul Duke and his Samoan attorney once turned Vegas into the most drug-focused large city in the world.

With Groth cheering him on, Hsieh started handing out money like candy. Got an idea but no experience? That’s okay! We invest in passion. Downtown Project wrote a check for $3 million for a clothing store called Coterie whose owner proudly announced, “We”re a place to hang out first, and a business second.” (After three years, they were neither.) Hsieh would run into people in bars and tell them they should decide what their dream was because he wanted to fund it. The term sheets for his $50 million Vegas Tech Fund stated that start-ups must prove out not only Return on Investment, but Return on Community (whatever that was). He even spent $2.6 million for ROCeteer, a support system for entrepreneurs that used “neuro-linguistic programming” to will success for the 74 companies funded by the Downtown Project.

The overriding goal was to get lots of people”smart people, young people, “culture fit” people”to move to Las Vegas permanently. Hsieh invested in Romotive, a company devoted to iPhone-controlled robots, because the founder was a professional rock climber who happened to be passing through town. He invested in Rabbit, a hipster rock band, because their music reinforced his happiness theme. He bought into a Fremont Street club called Krave in an effort to promote “the biggest gay nightclub in the world.” He persuaded an electronic-music performance group called the Dancetronauts to relocate from California. He created his own Burning Man-style festival called Life Is Beautiful. A company called Shift was a plan to buy 192 Teslas and run a taxi service for downtown Vegas that would outclass Uber and Lyft. Melonhopper was the latest in high-end Japanese-style cosplay fashion. And, of course, he moved his own company from suburban Henderson to the remodeled City Hall building.