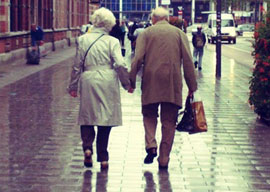 People have a lot of hang-ups about marriage.

People tell you how hard marriage is for them and to wait as long as possible before getting married.

People marry many times. Some later in life, some not at all. But people marry.

Almost half of marriages end in divorce. The percentage of children born to single mothers is high.

Yet I believe in marriage. I believe that not all marriages are bad. I also believe two people who know how to make good choices can be happier and better off together than alone.

“Just a few weeks ago I was walking through the park with my fiancÃ©; he had proposed to me that morning.”

I cannot remember a time when anyone ever encouraged me to marry. In the 20th and 21st century, marriage and coupledom are often sold to the masses by someone trying to make a buck, or by those who lament the family unit’s breakdown. Except perhaps for my father, unless it was being sold, marriage was always put to me in the form of a question rather than an order.

Over time I have formed my own view on marriage, and it is surprisingly traditional. At first a person should find someone with a similar background they get along with – not such an easy task; then they can get married; then they might have children, if they so choose. Many people nowadays choose to have a child before. I was born before my parents” marriage, as were my brother’s children before his. As you can imagine, I refuse to brush off the marriage-first approach.

Bringing it up in conversation can be a bad idea; many start to twitch and moan. They feel marriage is an obsolete institution. Some people have, for good reasons I am sure, a negative view on the subject. Perhaps unsurprisingly I know a happily married couple who say the simple reason they got married was for the good of their families, and not for them. That’s not news. Like them, I have also witnessed or experienced my fair share of bad relationships. People are not wrong to question the institution, but other people’s hang-ups about marriage are their own, not mine.

The problems people have regarding marriage are mistakenly placed on the institution. Rather it is on those who choose to enter into such marriages without due consideration, knowledge, or understanding that stand the blame. These people are like atheists. I much prefer agnostics to atheists. After death and taxes, certainties in life are few and far between.