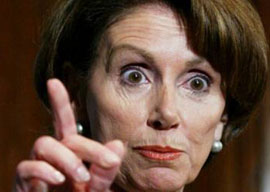 Among the most recent union affiliates to secure pardons from the one-size-fits-all health policy that their bosses spent hundreds of millions of dollars of worker dues lobbying for:

The ultimate goal, it bears repeating, is to force a massive, revolutionary and irreversible shift from private to public insurance designed by government-knows-best bureaucrats.

Pelosi and the Golden Ticket Administrators in Washington deny preferential treatment for waiver beneficiaries. But the stench of waivers-for-favors won’t be dispelled until and unless the Obama administration releases a full list not only of those who won exemptions, but also of those who applied and were denied.

With San Francisco businesses caught with their hands in the waiver jar, Pelosi’s office could do nothing else but pout: “It is pathetic,” said Pelosi spokesman Drew Hammill, “that there are those who would be cheering for Americans to lose their minimum health coverage or see their premiums increase for political purposes.”

It is far more pathetic to have cheered, as Pelosi did on the one-year anniversary of Obamacare, the law’s onerous benefits limits from which thousands of her own constituents have now been exempted.

Once again, the rest of America wants to know: Dude, where’s my waiver?