War Criminals of the “Harassocaust” 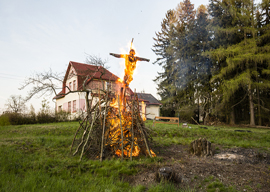 His career may indeed suffer because of this; his “hunters” have been reaching out to industry professionals telling them what a “monster” he is.

When I contacted Linda, my main desire was to find out from her if Scott’s “crime” had indeed been nothing more than a touch to the upper chest. She refused to answer any questions. Initially, she said she didn’t want to participate in any “formal, public discussion” of the issue…which I found odd because she had (and still has) a totally public thread about the matter on her Facebook page. She told me that Scott had apologized again, and this time she was willing to accept it, and now she only seeks “closure” (no mention of that in the Facebook thread, where her friends continued to call for the man’s scalp). She later clarified that she doesn’t want to go public because of a fear of “bullying” (like being told you’re going to be “hunted”?). One final “clarification” informed me that her real reason for not talking was that she didn’t trust my “bias” as Scott’s friend.

End of story. Except not for Scott. Apart from being emotionally ravaged by the entire incident, he has legitimate fears for his acting career.

Now, don’t get me wrong—it can be rude to touch someone, even at a party, without their consent. Having grown up as a wee child, always the smallest boy in class, and always at the mercy of the bigger kids, I’m not a fan of people putting their hands on me, even as a joke. But the reason I detailed Scott’s story is that it demonstrates how people have lost any and all sense of proportion regarding these kinds of allegations. It didn’t take much to be sent to the guillotine during the days of la Terreur. The notion of going after the worst of the nobles and hoarders was soon lost in a sea of blind fanaticism, a desire to lash out mindlessly, an atmosphere in which even the simple act of saying “Whoa, slow down, let’s be thoughtful” or “Sacré bleu, I think this person is innocent” could lead to a death sentence. Nothing good ever comes of that kind of madness.

The thing is, long before the “witches” episode, South Park had already done its defining show about the Harassocaust, without even knowing it. In the 1999 episode “Spontaneous Combustion,” residents of South Park begin exploding, apparently for no reason. Randy investigates, and determines that it’s because the townsfolk are holding in their farts. To end the combustion plague, Randy encourages everyone to fart as much as possible. But soon enough, a new crisis emerges because now people are farting too much, and the mass release of methane is causing global warming.

In the end, Randy realizes that both extremes are dangerous. Don’t hold farts in, but don’t fart every few seconds. Find the middle ground.

Being reflexively skeptical and dismissive of all abuse and harassment claims, which this town was for far too long, was bad. Accepting every claim uncritically is bad. Excusing and accepting genuinely abusive behavior by Hollywood big shots was wrong. So is equating a nonthreatening touch with rape. Both extremes are lousy.

On South Park, the people listened to Randy’s sage advice. In real life? He’d have been drummed out of town for trying to bring moderation to a mania.