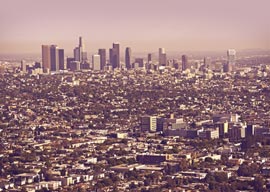 The important new book Ghettoside: A True Story of Murder in America, by Los Angeles Times homicide reporter Jill Leovy, is the hybrid of a true crime tale about the struggle of white LAPD detective John Skaggs to find the killer of the son of a black LAPD detective and a taboo-breaking scholarly analysis of America’s plague of black-on-black homicides.

At a moment when the conventional wisdom is coalescing around the idea that the big problem with the criminal justice system is white policemen being too mean to black criminals, Leovy drops a bombshell carefully justified by what she learned reporting from 2001 to 2012 on black crime in South Central Los Angeles. She argues the opposite: that white people should work harder to track down and lock up black murderers. Leovy admits:

This is not an easy argument to make in these times. Many critics today complain that the criminal justice system is heavy-handed and unfair to minorities. We hear a great deal about capital punishment, excessively punitive drug laws, supposed misuse of eyewitness evidence, troublingly high rates of black male incarceration, and so forth. So to assert that black Americans suffer from too little application of the law, not too much, seems at odds with common perception.

But if “black lives matter,” it’s time to get serious and admit that the main killers of blacks are, overwhelmingly, other blacks.

Ghettoside confirms the tradition of L.A. being the big leagues for crime writers.

Most parts of America can today boast of a local color crime writer, typically a former police beat reporter or a literary talent looking to make a living, such as the Ozarks” Daniel Woodrell, author of Winter’s Bone.

Perhaps the seminal crime for Los Angeles literary history was the 1929 murder-suicide in the Greystone Mansion of Beverly Hills of Ned Doheny, son of an pioneering California oilman, fictionalized in There Will Be Blood, and his secretary Hugh Plunket, who was under subpoena to testify in the Teapot Dome scandal in Washington. An obscure Los Angeles oil company executive named Raymond Chandler noted that the newspapers initially reported that the scion had shot his staffer and then himself. But on the second day of the story, coverage simply reversed”with no explanation”the key angle of “Who? Whom?”

When the Anglo-American Chandler, who had failed at making a living as a man of letters in Bloomsbury, found himself jobless again during the Depression, he resolved that he was going to write genre crime fiction (although with superior English literary skill). The 1929 double shooting in Greystone”with its glamor, wealth, political corruption, and warping of the press”remained an inspiration for Chandler, as his detective hero Philip Marlowe explained in 1942’s The High Window.

But most murders in Southern California don”t take place in the largest mansion south of Hearst Castle. Most aren”t worth fixing the news coverage for, because there’s almost no news coverage, because there are so many homicides in Los Angeles.

Blacks killing blacks are especially depressing and dull to potential audiences, as Chandler observed in his 1940 novel Farewell, My Lovely. A lazy, ineffectual LAPD homicide detective named Nulty complains at length to Marlowe about getting assigned to the murder case the private dick witnessed in a South Central black bar. The aptly named Nulty laments that he gets stuck with the all the boring black crimes that get no space in the newspapers (crimes that Nulty never solves). When Marlowe encourages Nulty to go get the killer, Nulty replies:

“I”ll get him,” he said, “about the time I get my third set of teeth. How many guys is put on it? One. Listen, you know why? No space. One time there was five smokes carved Harlem sunsets on each other down on East Eighty-four. One of them was cold already. There was blood on the furniture, blood on the walls, blood on the ceiling. I go down and outside the house a guy that works on the Chronicle, a news-hawk, is coming off the porch and getting into his car. He makes a face at us and says, “Aw, hell, shines,” and gets in his heap and goes away. Don”t even go in the house.”

In this century, two obscure white female reporters”Christine Pelisek of the L.A. Weekly and Leovy of the L.A. Times“have set out to do something about the pestilence of black murderers in their city.

Pelisek broke the story of the Grim Sleeper serial killer, so-called because he was back on the prowl after taking a decade and a half off. The arrest of Lonnie David Franklin, Jr. in 2010 led to a horrifying realization: there had been at least five serial killers active in South Central in 1984-1994, murdering about 100 people, most of them black crack prostitutes”and nobody noticed. The Los Angeles Times reported in 2010:

… few people in South L.A., including parents of victims, were even aware of a serial killer operating in their neighborhood”much less five or more. While the more publicized cases had distinctive hallmarks, in South L.A. there were so many people being killed, almost all of them from the margins of society, that it was difficult for neighbors or police to pinpoint any patterns.

The rapes and murders of dozens of young women were, effectively, lost in the crime wave.”¨”¨”Could you imagine”more than 100 women killed and nobody notices?” said Margaret Prescod, who founded an organization 24 years ago to press for a more aggressive response to the killings and now hosts a radio show. “Could you imagine it in Beverly Hills? Palos Verdes?”

Four of the five overlooked serial killers were black.

Leovy is something of a data nerd. Because her L.A. Times only covered about one out of every ten murders in Los Angeles County, she started the Homicide Report blog on the paper’s website.

In 2010, I analyzed the first 2,600 killings covered by her blog. Only 9 percent of Los Angeles County’s roughly ten million people were black, but they accounted for an imposing fraction of the dead. Among 15- to 29-year-old male victims of homicide in L.A. County, blacks outnumbered whites by a per capita ratio of 20.7 to 1, while Hispanics outnumbered whites 6.8 to 1. (According to the Obama Administration, the national ratios are lower but still eye-popping.)

Those were the ratios for homicide victimization. All evidence suggests that the homicide offending racial ratios are similar or worse. But it’s hard to pin down the exact figures, because so many homicides in Los Angeles never lead to an arrest. Leovy estimates in Ghettoside that only 38 percent of the murders of black males are “cleared” by an arrest.

Keep in mind that the current LAPD is a relatively professional police force. Much of the Nulty-type deadwood was cleared out in a “scouring of the Shire“ phase after World War II, when police chief William H. Parker imposed military professionalism on the once shambolic outfit.

… there were few mysteries among Southeast cases. The homicides were essentially public events”showy demonstrations of power meant to control and intimidate people. They took place on public streets, in daylight, often in front of lots of people. Killers often bragged.

Skaggs learned to think of his job as persuasion: selling formal law to people who distrusted it and who were answering to another authority”shadow law. The pitch had to be convincing and relentless. Ghettoside detective work was “ninety percent talking to people.”

Leovy guesstimates that about a dozen witnesses were murdered per year in the first decade of this century in LAPD’s southeast division, enough to have a massively chilling effect on cooperation. (I”ve long argued that the death penalty should be preserved as a higher penalty to deter witness murdering.)

The low clearance rate doesn”t mean all the killers are still walking the streets. No doubt a substantial portion have been in turn murdered by others, some in formal retribution, and some just for the usual knuckleheaded reasons that inspire blacks to murder each other.