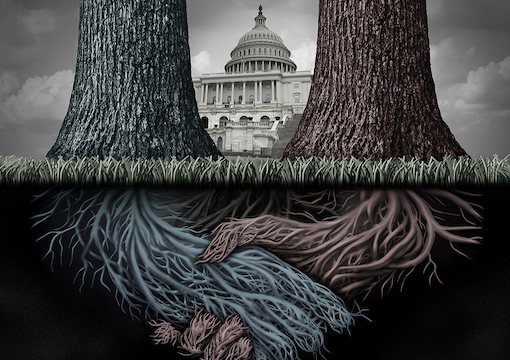 Societal decline is best imagined as a drunk man falling down a long flight of stairs, maybe a long spiral staircase. He begins at the top, the peak of the society, then carelessly makes the wrong steps and begins to tumble down the stairs. It is not a rapid or steady fall to the bottom. Instead, he hits a landing, rights himself for a bit, but regaining his confidence he makes another wrong step and takes another tumble.

Some of the landings are long and he is able to function at that level for a while, thinking he is still at the place he started. Maybe he takes a few tentative steps back to the old position higher up the stairs, but eventually it is another misstep, and he falls back down past that landing to another landing farther down. This is societal decline. It is periods of decline punctuated by periods in which it feels like the decline has been arrested.

This is useful to keep in mind as we watch the new regime come to grips with the new reality they face. For five years their sense of identity was built around opposing Donald Trump and his voters. Now that is gone and there is a great hollow place in the middle of their lives. Just as happened after the left ran Nixon out of town, today’s left is finding out that life is hard without their favorite devil.

The comparison between Trump and Nixon is an obvious one. Both men were hated by the same sorts of people for the same sorts of reasons. Trump, like Nixon, put the lie to progressive morality. These people are not acting from virtue or a sense of moral duty, but from the selfish desire for privilege. They saw Nixon and Trump as vulgar bumpkins who had no right to be in their presence, much less the White House.

“Conservatism is a bombed-out shell populated by parasites in expensive suits, scavenging for the remains of the middle class.”

Extending the analogy further, the left of a generation ago agonized over the unrealized future they were sure Kennedy would have ushered in if he had lived. Kennedy was not killed by a communist; he was killed by racist, regressive white America. You know, Nixon voters. After all, Nixon’s “Southern strategy” was an explicit appeal to white voters disgusted by the 1960s cultural revolution.

A generation on, Obama was this generation’s Kennedy, but instead of being martyred, he was just too lazy to do much of anything. That is not an acceptable answer, so they believe he was thwarted from ushering in the post-national, multicultural future by a secret cabal of racists and fascists. These are the people who put Trump in the White House. After all, his MAGA pitch was explicitly aimed at disaffected whites.

In this analogy, Biden becomes the Jimmy Carter act in the play. After Nixon was dispatched, the left was suddenly left without a reason to exist. Carter ended up in the White House mostly by dumb luck. The radicals were too disorganized to have a strategy for exploiting the Watergate scandal. The establishment had no one they could put up with a chance to win. Carter exploited the primary rules to win the nomination.

Similarly, Biden’s journey to the White House was the result of serendipity. The preferred options of the establishment were as appealing as rectal cancer. None of them could gain public support. The radical option reminded most voters of that old college professor who smelled like feet. Biden had black support, so that was enough to get him the nomination, even if he had no idea where he was most of the time.

No historical analogy is perfect, as we are not living in an endless loop. For example, Carter was a smart man and a capable politician. He had a clear understanding of his position, even though he had no solutions for it. Biden, in contrast, was always a jovial simpleton and now he has dementia. He is the manifestation of the bug-man, a shell of a man animated by others.

Another way the comparison breaks and how it relates to the concept of societal decline, is there is no landing for the ruling class this time. In the 1970s, the conservative movement was forming up and Ronald Reagan was ready to lead it. Buckley conservatism was always right-wing progressivism. It was a reform movement that embraced left-wing morality on race and sex, but with improved economics and a strong stand against the Soviets.

This is something that troubles older conservatives. They still cling to the belief that Reagan and Buckley were enemies of the left. In reality, Reagan was a New Deal Democratic, a supporter of the FDR coalition. He often talked about this. When asked why he left the party, he always responded, “I did not leave the party. The party left me.” Reagan’s mission in politics was to restore the New Deal consensus, not overthrow it.

There is no Reagan waiting in the wings this time. There is no conservative movement ready to clean up the mess from the exhausted left. Conservatism is a bombed-out shell populated by parasites in expensive suits, scavenging for the remains of the middle class. Both parties are huddling closer together, locking their shields in an effort to defend the managerial consensus against the growing frustration of the public. Put another way, there is no landing ready to catch the fall this time.

It is always good to remember that things can always get worse. This time around the left is smarter and more ambitious. They have a broad base of support in the new power centers of America. Former barmaid Alexandria Ocasio-Cortez is raising money for a presidential run in 2024. She will start with the support of the disaffected Bernie Bros. That is enough to make her a legitimate contender and give the media a reason to heap praise upon her.

There is also the fact that Biden reminds everyone of how their late grandfather died in the nursing home and Harris reminds everyone of when they last renewed their driver’s license. AOC, the face of woke women everywhere, will be manna from heaven for the media. She may be a raving dingbat, but she makes good television. More important, she would promise to kill off the baby-boomer consensus and usher in a far-left hegemony.

While this tumble down the stairs looks a lot like the one from the previous generation, it is happening farther down the staircase. America was 85% white in the 1970s. The 2020 census is still being created, but the 2010 census had us at 63.7% non-Hispanic white, so the country is close to majority nonwhite now. The white population is that landing on the stairs, and it is much smaller now. The nonwhite population is the risers, making the decline much steeper and much faster with each generation.