We Haven”t Waited This Long for Olivia Munn 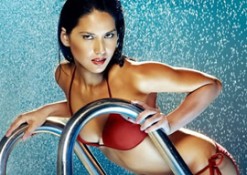 Sometimes being a woman in a man’s world gives you the advantage. Yet even in the so-called liberated world, people tend to defer to men. As in the case of Sandra Bullock’s ex, Jesse James, the world cast aspersions on the other woman more than on the cheating husband. Myself included. Why? Well, time and time again we see women failing to remember their own desires for equality because they have been indoctrinated by a patriarchal system, and often harbor the same biases as men. Actually, many women are more likely to excuse a man before one of their own because ultimately, the prevailing paradigm favors men. At the same time, we call ourselves liberated women, or even worse, feminists.

Remember Sarah Palin? Since her rise to fame during the last election all too many women (and men) attacked her. Horrible emails circulated about Palin. One in particular struck me as contemptible. It was a photo of women suffragists. The caption said something like “we haven”t waited this long for Sarah Palin.” That there wasn”t anybody better than her speaks more to the fact that women have failed to liberate themselves from patriarchy than to Palin’s supposed ignorance. When women disparage other women, they are doing more harm to themselves than a machista ever could. Whatever Palin may or may not be, or whatever one’s political preferences might be, she has achieved more than the average American. Why knock her down? Rather, women should be bolstering her, supporting the feminine potential, and lauding her for her admirable accomplishments.

Just recently, the comedienne, Olivia Munn, has been grossly excoriated because she is a smart, attractive, humorous, and successful woman. The venom, it seems, is spurred by little more than envy and ignorance. Though of course it could also be attributed to the fact that Munn uses her body to sell herself rather than her mind. An all too common practice, and resounding indicator that most of the world is beholden to their low-minded instincts. In a revealing interview, Munn describes the humiliation she felt when agreeing to pose for Playboy in a bikini. She describes the shame and indignity that overcame her when she was bullied by the photographer to strip completely. She even admits the episode pushed her to tears. Although Munn ascribes the cause of her suffering to the photographer’s bullying, I can”t help but wonder how a little red bikini made the difference between a potentially degrading act and a cheeky one. Just maybe, embracing female sexuality and liberation isn”t synonymous with nudity. Modesty isn”t always a form of oppression. One might argue that her shame is rooted in her own erroneous thinking, and that instead, wanting to appear on the cover of a pornographic magazine fulfilled her instinctual need to be desired by men. An act which would have been unnecessary if Munn had been in closer contact with her intellectual capabilities, and truly free from the visceral shackles placed on her by society.

“We believe we live in a world where women are no longer treated like dogs, and where men don”t run the show alone. Yet we are constantly confronted by the maltreatment of women as well as the virile and virulent need to exert power over others.”

Sybaritic Kim Kardashian was encouraged to pose for the same rag recently by her own mother. She later lamented the decision. Kris Jenner, Kardashian’s mother and manager, might have pressured her daughter to pose as a matter of business. But why weren”t the roles reversed? Picture the scenario, daughter wants to pose for Playboy, mother tries to discourage her. Perhaps in the 1950s or 60s this would have been the case. Fifty years on, the roles are reversed. Quite possibly, Kris Jenner is fulfilling her own convoluted impulses, and is still governed by an outdated practice where women use their beauty and their bodies more than their minds. Of course she could just be pushy, greedy, and self-serving, an all too common characteristic of Jenner’s generation.

Baby boomers are unique in that they are stuck between two different eras. As a result, their children often receive mixed messages. On the one hand we have the freedom to talk about our feelings, and have grown up in a world where women have many more advantages than previous generations. On the other, Baby Boomers are still marred by obsolete ideologies that favor one group or lifestyle over another. For those of us who were born during and after the Nixon presidency, the physical and psychological implications can be stunting and annoying. We believe we live in a world where women are no longer treated like dogs, and where men don”t run the show. Yet we are constantly confronted by the maltreatment of women as well as the virile and virulent need to exert power over others.

Like most people with red-blood ancestry, I grew up in a world where women are tolerated, but mainly for the pleasure of men. A woman’s thoughts and secondary needs are not taken very seriously. Though it is not meant malevolently, an unruly woman will be put down straightaway. After all, women must know their place! At the moment I am traveling in the fatherland. On almost a daily basis I am brushed off by a taxi driver, waiter or random Greek male who lets me know with absolute ease that my opinions don”t really count. A galling sensation. Just yesterday I found myself out of gas. Most petrol stations have been shut down by a union strike. As it is Greece, I knew there were ways to get around the shortage, someone somewhere would be making a deal. I set out with my two red tanks. Within 30 minutes I had the fuel. All I had to do was act desperate, smile, and be a bit patient. I guess once in a while, being a women in a patriarchal world has its blessings.