What the Bible Really Says About Homos 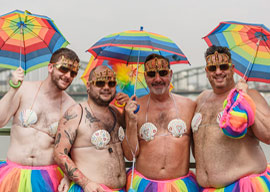 Claiming that homosexuality and Christianity are incompatible, Rev. Paul Kalchik—a Catholic priest from Chicago’s North Side with blazing blue eyes, eager lips, and a warm, winning smile—recently burned an LGBTQ rainbow flag in the schoolyard next to his church. Along with seven or so followers, he did it in defiance of orders from higher-ups and claimed the act was a ritual “exorcism” of believers who tolerate the “gay lifestyle.”

After Kalchik was ordained as pastor of Resurrection Catholic Church in 2007, he claims he found all sorts of remnants that betokened a fruitier former era of fag-fetishist priests—there were rainbow-colored priestly vestments and rainbow-colored candles, all of which he quickly condemned to the great landfill in Hades with an almost simian level of pure masculine rage. But it was only recently that he found the gay church banner in storage. It featured a cross superimposed over a rainbow and had flown over the church’s altar in 1991. Kalchik now says he regrets the initial oversight: “It was just by accident that this banner that was made to celebrate all things gay…did not get destroyed when I first got here.”

Kalchik had announced in a church bulletin on September 2 that he planned to torch the flag on September 29. After local news outlets caught wind of the story, the archdiocese allegedly threatened him with “canonical penalties” if he proceeded to burn the flag. So instead of making a grand public display of it on the Feast of Saint Michael, Gabriel, and Raphael, Kalchik and some followers quietly burned the flag on September 14 right outside the church.

After the gay flag turned to ashes that were dumped in a compost heap, the Archdiocese of Chicago issued the following statement:

Archdiocese leadership previously contacted the pastor to notify him he could not move forward with that planned activity. We are following up on the situation. As Catholics, we affirm the dignity of all persons.

All persons? Even those filthy, germ-plagued sodomites? Really? Are you aware the Lord Jehovah affirms that they are an abomination?

“Anyone who thinks it’s possible to be a gay Christian might know something about being gay, but they know not a whit about Christianity.”

Kalchik was allegedly instructed personally by Chicago’s Cardinal Cupich—who is reportedly very fag-friendly—not to burn the fag flag. According to Chris Pett, president of Dignity USA, an organization which encourages Catholics to embrace sodomites, Kalchik was “hijacking the parish and trampling on core Catholic values.” He called him an “renegade priest pursuing an extreme agenda.”

The fag-fighting priest told his critics to kick rocks:

I can’t sit well with people like Cardinal Cupich, who minimizes all of this. Excuse me, but almost all of the [abuse] cases are, with respect to priests, bishops and whatnot, taking and using other young men sexually. It’s definitely a gay thing….That banner and what it stood for doesn’t belong to the Archdiocese or Cardinal Cupich. It belongs to the people of this parish who paid for it. What have we done wrong other than destroy a piece of propaganda that was used to put out a message other than what the church is about?

Kalchik claims that he is a two-time victim of sexual abuse: first by a neighbor during childhood, then when he was 19 by a Catholic priest. He says that when he assumed leadership of his church, he had been preceded by a trio of “bad priests” who were “big in promoting the gay lifestyle.”

And then he splat the thick, gooey money shot all over the simpering pink faces of those who think it’s possible to simultaneously be gay and a Christian:

DING-DING-DING-DING! I’ve been saying this for decades. Anyone who thinks it’s possible to be a gay Christian might know something about being gay, but they know not a whit about Christianity.

Here’s what the Holy Book says:

You shall not lie with a male as with a woman; it is an abomination. —Leviticus 20:13

If a man lies with a male as with a woman, both of them have committed an abomination; they shall surely be put to death; their blood is upon them. —Leviticus 18:22

For this reason God gave them up to dishonorable passions. For their women exchanged natural relations for those that are contrary to nature; and the men likewise gave up natural relations with women and were consumed with passion for one another, men committing shameless acts with men and receiving in themselves the due penalty for their error. —Romans 1:26-27

Now we know that the law is good, if one uses it lawfully, understanding this, that the law is not laid down for the just but for the lawless and disobedient, for the ungodly and sinners, for the unholy and profane, for those who strike their fathers and mothers, for murderers, the sexually immoral, men who practice homosexuality, enslavers, liars, perjurers, and whatever else is contrary to sound doctrine… —1 Timothy 1:8-10

So exactly what part of “Men who lie with men as they would with women should be put to death, and after death it gets even worse, because they will never go to heaven and instead will be punished eternally” didn’t you grasp there? How many more times do you have to hear it before it penetrates that granite skull of yours?

There are other biblical verses that say much the same thing but aren’t quite as down-your-throat-and-up-your-ass as those I cited. In 2 Kings 23:7, the Lord destroys “the houses of the male cult prostitutes.” Deuteronomy 22:5 forbids cross-dressing among either sex—this is, mind you, before the concept of “transgender” even existed. I think that one was invented about 11 years ago, if memory serves. And the passage about Sodom and Gomorrah in Genesis 19 doesn’t specify deviant sex acts, but it’s thought that the men of Sodom kept bugging Lot to deliver two male angels to them for the purposes of butt sex.

Apologists and revisionists and denialists will quibble over translations, as is their right. The fact is that until very recently, in nearly all sects of Christianity since its inception, faggin’ off was verboten. And since God decided to use the word “abomination” twice, it’s fair to believe that man-on-man action sickens him right down to the very depth of his divine guts.

So the flag-burning, fag-bashing priest is right: You can’t be a gay Christian. Pick one. Or neither. But you can’t pick both.