What to Do About Antifa and Black Lives Matter 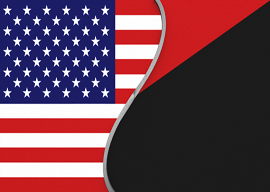 In recent months Rep. Maxine Waters, former attorney general Eric Holder, and other powerful Democrats have called for Americans to protest and even confront members of the Trump administration and Republican candidates and lawmakers. Although nobody in the state-sanctioned “resistance” has owned up to this terribly irresponsible behavior, their rabble-rousing has not only influenced people to harass prominent Republicans at restaurants and other public places; violence against Republicans—which is not a new trend—has been increasing, and Waters, Holder, and the rest are partly to blame.

Shane Mekeland, a candidate for the Minnesota House of Representatives, said he suffered a concussion when he was attacked while campaigning last Friday at a restaurant in St. George Township. According to Mekeland, his assailant made remarks that led him to believe the attack was politically motivated.

On Sunday, also in Minnesota, Rep. Sarah Anderson alleged that a man punched her in the arm in response to her confronting him about kicking some signs on her front yard.

Meanwhile, Antifa and Black Lives Matter have been terrorizing Portland, Oregon. On Oct. 6, a group of more than 100 turned out to protest the death of Patrick Kimmons, who was shot and killed by police on Sept. 30 after a gunfight in which two men were wounded. Police believe it was Kimmons who shot the two men.

As ever with the new identity-politics left, the context of the man’s death meant nothing: Since Kimmons was black, he had to be a victim of police brutality.

The group of protesters included members of the Kimmons family. One of them, Charles Kimmons, told The Oregonian, “We’re not here to riot. We’re here for justice. We need to fight this all the way to the end. These cops need to be locked up.”

But whatever may have been the intentions of Kimmons and the others, the scene was certainly riotous. Video footage shows “the resistance” essentially taking over a section of the Rose City. Passersby and drivers are harassed as protesters presume to disrupt and direct traffic. Drivers are ordered to go around the protesters. Most do, while those who don’t immediately find themselves in very dangerous circumstances.

One man objects to driving around the protesters and asks for an explanation.

“Because I told you to!” a corpulent cat lady dressed in all black exclaims.

Then a mob curses at him and someone, seeing his North Carolina license plate, screams, “Go back to North Carolina! We don’t need your KKK.”

There are police officers nearby, but this being Portland, they do nothing, so the man calls the police on his phone.

Bad as all this was, he is lucky it was not much worse.

A 70-year-old man alleges that he got out of his car to ask protesters to move. Once they grabbed him, he got back in it. Protesters then began hitting his silver Lexus, smashing the driver’s side window. He too was pretty fortunate, all in all.

“The more we strive to be fair, the more we should expect conflict in response.”

In a different video, another senior citizen, this one wheelchair-bound, is seen being harassed by protesters after allegedly asking one of them to stop using a megaphone outside her apartment building.

“Old-ass lady, nobody is listening to you!” answers the woman with the megaphone. She then bizarrely pretends to be some sort of victim. “Help, officer! I’m being attacked!” shouts the lying hysteric, who needed no megaphone.

A police cruiser and an officer are visible in the background but don’t intervene.

After yelling and carrying on for several minutes, the “mourners” disperse.

To a man trying to help her the poor woman laments:

There were no reported arrests after all this chaos.

Andy Ngo, a journalist and Portland resident, summed up the awful scene and the failure of the police to do their job:

What you saw…was that demonstrators were allowed to take over a street in downtown Portland and direct traffic and threaten drivers—[to] stop traffic while police looked on from a block away because they were afraid of inflaming the situation.

According to Sgt. Chris Burley, the Portland police spokesman, the reason police didn’t intervene is that they weigh “the ability for people to gather to practice their First Amendment rights to freedom of speech and assembly, as well as the impact it places on the rest of the Portland community.”

But take heart, you Deplorables, for Burley added, “Throughout this event, the police bureau was monitoring the crowd” (my italics).

In other words, the police sat back and watched while Antifa and Black Lives Matter harassed and terrorized innocent people. Each and every one of these officers should be fired, starting with those at the top who presided over the violent farce.

Such left-wing violence is not new in Portland. In August, a man named Paul Welch was assaulted by Antifa members who were protesting a right-wing rally. Ironically, Welch is a Democrat and Bernie Sanders supporter. Yet the man had dared to carry a “fascist symbol”—that is, an American flag.

In an interview on MSNBC in late July, Maxine Waters said:

I have no sympathy for these people that are in this administration who know it’s wrong what they’re doing on so many fronts, but they tend to not want to confront this president….

Not for nothing has President Trump called Waters “an extraordinarily low IQ person.” It is evidently asking too much for her to understand that if families don’t want to be broken up, then they shouldn’t enter the country illegally, just as a man shouldn’t break into my home if he doesn’t want to be shot.

When someone as influential and powerful as Waters encourages people to “absolutely harass” their fellow citizens for not agreeing with them, no one should be surprised if political violence becomes widespread. After all, the left believes it is very much in the right, and that its enemy is evil, nor does history contain a more pernicious or intractable justification than evil in the guise of righteousness.

The more we strive to be fair, the more we should expect conflict in response. For on the whole, human groups, as I have argued, will never accept fair but unequal outcomes, because human nature’s difficult need for esteem is an insuperable problem and source of delusive resentment. It is uncontroversial to say that Germans are good at engineering, that Italians are good at opera, that Asians are good at math, and so on. These things are all positive. But when it comes to unequal—not to say, unfair—outcomes, certain negative comparisons are inevitable. And it’s here that many people, instead of facing the unwelcome truth, are inclined to believe America is systemically racist, sexist, and so forth. For they would rather feel righteous than face the simple reality that the world is not answerable to their moral sentiments.

It is, of course, the other way around. Still, moral psychology serves to make men and women blind. They have certain internal moral values and, though they don’t realize it, constantly read them into external phenomena. This is not a rational but an affective affair, so though we may wish to correct people’s mistaken beliefs, and though we should try to do so, just as we should try to avoid violent conflict, it must often happen that reason is ineffective at this endeavor, and violence the only recourse.

Why do so many people despise President Trump (intellectuals especially)? Because in an age of genteel conformists and cowards, he is a man, nor can they understand what that means. Being a man, Trump should have the principled resolve, whenever left-wing groups are disrupting and terrorizing citizens as they have done lately, to send in the National Guard, or do whatever else is necessary, to stop such evil. It is desirable for these left-wing groups to be subjected to state violence, lest they become only more insolent and dangerous. Enough empty speech—it is time for decisive action! Crush the enemy’s will and be indifferent to the subsequent criticism.

As we’ve seen, all it took in Portland was a North Carolina license plate for someone to assume a fellow citizen was a member of the KKK. As it happens, I spoke last week with an historian friend who lives in North Carolina about the left’s increasing violence. He mentioned he knows some biker types—not to say, “white supremacists”—who are getting sick of that violence and ready, indeed itching, to fight back.

There are perhaps more of these American roughs around than people realize. I don’t see many here in Philly, but I know there is a fair amount of them in the counties surrounding the city, as I’ve observed them throughout my life. Most of these persons are not, I think, the types to protest and make a big show of things, but their frustration and anger are quite serious, and not to be taken lightly.