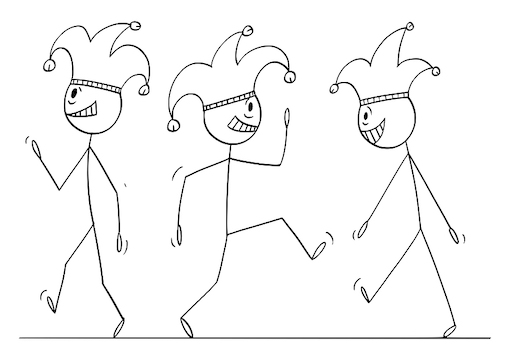 It is axiomatic that uninformed people are the easiest to deceive. A corollary to this rule is that people are most certain about the things they understand the least. Scientists are well aware of the gaps in their knowledge, but the evangelist is absolutely certain about the truth of whatever he is peddling. Taken together, intelligence and experience lead to prudence, while stupidity and ignorance lead to foolhardiness.

Working backward from this understanding, we can begin to understand why the American ruling class is going insane. The defining feature of this age is that the people in charge are certain about things that are imaginary. The government, for example, has denied Christians a permit to assemble for the National Day of Prayer, because they fear invisible White Nationalists will launch a revolution.

They think this because they are sure the January protest at the Capitol was part of a plot to overthrow the government. The nation saw mostly flag-waving boomers taking selfies and laughing with the cops. The political class is told it was cover for an invisible army of white supremacists. These white supremacists are lurking out there on the other side of the razor wire, waiting for the chance to pounce.

“The defining feature of this age is that the people in charge are certain about things that are imaginary.”

There is no question that the country is at odds with itself and its ruling class over a long list of issues. The race issue remains as troublesome as it was when Lincoln gave the Gettysburg Address. Our politics are a disaster of fraud and corruption. These are true things, but the ruling class talks about them from a position of ignorance. They sound so weird, because they have no idea what life is like for the rest of us.

This starts with Joe Biden, a man who has spent his adult life in government. His “private sector experience” was at a political law firm for a year fifty years ago. Now, of course, his brain is scrambled eggs, but even if he were still in control of his faculties, he would have no reason to question the claims about invisible Nazis hiding around the capital. Why would he? Everything he knows comes from government.

His second-in-command and future leader of the free world (stop laughing) is Kamala Harris, who has never sullied herself in the dreaded private sector. She spent the first four years of her “work life” making sure Speaker of the California Assembly Willie Brown was feeling groovy. Then she ran for office and it has been twenty years of uninterrupted life in one elected office after another.

Arguably, the third most powerful person in America is Nancy Pelosi. Under the section titled “Private Sector” on her Wikipedia page is nothing but a string of emoticons to indicate hilarious laughter. Pelosi has never had a real job. In fact, she comes from a family of taxeaters. Her father was a lifelong politician. Her brother was also a lifelong taxeater, largely credited with ruining Baltimore while mayor.

The second banana in the House is the octogenarian Steny Hoyer, who, like his boss, has avoided the private sector his entire life. According to his bio, he was a mediocre student, so he naturally chose politics. He was a Senate staffer while attending law school and then ran for an open seat upon graduation. He has spent 55 years without ever having worked a real job.

It is not just Democrats who are allergic to honest labor. The top Republican in the House is Kevin McCarthy. His first job out of college was as a staffer for Congressman Bill Thomas of California. Then he was chairman of the Young Republican National Federation. He was elected to the California State Assembly in 2002 and then won a House seat in 2006. He has been in Congress ever since.

The GOP’s second-in-command in the House is Steve Scalise, a man who appears to have started out in life with the hope of making himself a productive citizen. He majored in computer science at LSU. He must have fallen in with a bad crowd along the way, as he never made it to the dreaded private sector. Instead, it was time in the Louisiana state legislature and then off to his current spot in Washington.

The No. 3 Republican is the most amusing. Liz Cheney, the daughter of former vice president Dick Cheney, is the Republican Conference Chair. Unlike her bosses, she technically had a job in the dreaded private sector. She worked at a law firm that is called White & Case LLP. Granted, it is just a cat’s paw for the American empire, but it technically counts as the private sector. After that short run, she was on the dole in one government job after another before landing in Congress.

Of course, these people are surrounded by an army of staffers and consultants who have also avoided real work. The people who occupy the staff spots for elected officials and the congressional committees are just as committed to avoiding honest labor as their bosses. They start as interns, get a staff job out of college, then maybe a trip to law school and then it is back on the government payroll.

This is why these people sound so weird. How could Liz Cheney know anything about the concerns of the people she is supposed to represent? Wyoming is just a place she has read about and visited on vacation. The people of the state would be better off hiring a Frenchman who once went on holiday to Jackson Hole. That Frenchman would know he knows nothing about Wyoming and would maybe hire some locals to help him out. Liz Cheney’s staff is all pod people from the Washington hack-a-rama.

This phenomenon is not exclusive to politics. The media is stocked with carnies who maybe waited tables once, but otherwise have no contact with present reality. Their life is on stage, playing the role written for them by equally obtuse and ignorant people. The mass media is a circus, but the audience is out of sight from the performers. The media carnies cannot hear the laughter and jeering. It is nothing but piped-in applause, which they assume is the real thing.

This brings us back to those axioms of life. The people in charge are running around spouting crackpot conspiracy theories because they know little about the people they govern. They are easily fooled, because they are so ignorant. Why would they question the Russian conspiracy? Everyone they know thinks it is true. Those ants they see through their telescope, the people the rest of us call neighbors, sure seem to be doing what the Russian experts have claimed.

This is why they are so certain of these crackpot theories. They have barricaded themselves behind razor wire and armed men because they are absolutely sure the crackpot theories are true. Again, people are most certain of the things they least understand. The Cloud People know so little of the Dirt People, they will believe anything about them, because they have no way to know otherwise. It is why we find ourselves ruled by increasingly foreign fanatics spouting bizarre conspiracy theories.

History says that when the gap between the reality of the ruling class and actual reality gets too wide, there is a break. The French Revolution and the Bolshevik Revolution are two examples. The ruling class became detached from the people they ruled, so they could not see what was coming. Similarly, the credentialed naïfs of the managerial class are blind to present reality. They do not know what they do not know, but they are absolutely certain of it and it will not end well.