When Refugees Were Conquerors 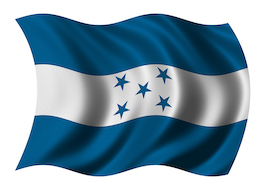 Ah, the refugee caravan. Would it be a midterm election without a bunch of oppressed brown-skinned asylum seekers storming the border? In a way, these refugees are like cicadas, appearing with clockwork predictability anytime the powers-that-be need a good “humanitarian crisis” to tug on voters’ heartstrings. So now we have the Hondurans…marching toward the border, holding the flag of their native country, demanding political asylum because (according to them) if they were to stay in their native country, they’d be slaughtered by their beloved countrymen. But hey, let’s proudly wave the flag of that native country made up of assholes who want us dead.

Remember when all those Jewish refugees from Germany in the 1930s arrived in the U.S. waving Nazi flags? No? Neither do I. I mean, I hate to come off as suspicious or untrusting, but it seems a little odd to be haughtily displaying the flag of a country that you are supposedly fleeing because everyone there wants to murder you.

And just as in the case of the Muslim and African immigrants flooding into Europe, we’re told by our benevolent leftist overseers that we must “let them in! They’re not trying to remake the West; they just want to be productive members of it. Let them have a home in your prosperous land, and they’ll share and care just like Barney the Dinosaur.”

Interestingly enough, the left’s attitude toward refugees was not always so, how should I put it, optimistic. That whole “benefit of the doubt” thing, that they come to be good lil’ helpers instead of colonizers and transformers, is a post–World War II phenomenon. Nativists on the right have always seen mass immigration as a danger. Many times they’ve been correct, but, to be fair, sometimes they’ve been proven wrong (“Don’t let the Irish in or within twenty years we’ll all be ruled by the Pope.” “Don’t let the Slavs in or within twenty years our national IQ will drop thirty points”). But I’m not talking about rightists. What interests me is the changing attitude of the “progressive” left. The “enlightened,” “humanist,” “rationalist” left. The people who now condemn as racist monsters anyone who advocates stemming the flood of third worlders pouring into Western nations.

It wasn’t always this way with them. Leftists used to have a far different attitude toward refugees. To quote every teenager who’s been turned down by an old buddy after asking to borrow twenty bucks, “You’ve changed, man. You used to be cool.”

Ever heard of Atlantropa? Probably not. It was a nutty scheme hatched by a nutty guy, and it never had even the remotest chance of ever coming to pass. In the 1920s, Europe was suffering from a myriad of post–World War I problems. There was a refugee crisis, the result of the shifting borders and population transfers that occurred at the war’s end. There was an energy crisis, and a serious shortage of natural resources. And, of course, there was the economic depression. Several years before a madly gesticulating Austrian with a wacky mustache would rise to power with his own solution to the continent’s ills, a plucky architect from Bavaria named Herman Sörgel proposed a different one: Drain the Mediterranean! Dam the Med and partially drain it, in order to form a contiguous body of land between Europe and Africa. A new continent that would be called Atlantropa. To Sörgel, this would cure Europe of all that ailed her. The dammed Mediterranean would create hydroelectric power plants to relight Europe’s recently dimmed lamps, and the elimination of pesky ocean crossings would allow millions of European refugees to stream into Africa, where they would take their rightful place as lord and master. Better still, this newly conquered African land would be ripe with fertile soil, minerals, and a plethora of natural resources for the taking.

“What we’re witnessing today is one mad dream having been replaced by another.”

Oh, Herman Sörgel, you pie-in-the-sky dreamer! You were the Elon Musk of your day (but slightly more grounded). The idea never took off, not just because of the fact that it was batshit insane, but also because, at that time, the left’s intellectual elite—the League of Nations crowd, the “forward-thinkers”—understood that you don’t cure one nation or one continent’s refugee problem by sending all of the huddled, wretched refuse to another people’s nation or continent. Back then, the left understood that this would pose serious problems for the host nation or continent. And the left was right. Atlantropa would have been a nightmare for native Africans, and eventually, there would have been a Rhodesia- or South Africa-style reckoning.

In the 1920s, if anyone had suggested that the specter of millions of European refugees streaming into Africa did not constitute an invasion, that person would have been dismissed as a lunatic, because of course it would have been an invasion. Those in favor of Atlantropa, and those against it, all got that point. The European refugees would not have been content to live like Africans, or to live under African rule. Europe’s refugee crisis would have become Africa’s domination crisis. So to the liberal elites, the best solution was to tell the refugees to stay put.

There was simply no debate back then that a mass influx of European refugees to Africa would have been a conquest, not a “humanitarian crisis” that Africans, with their ample space and nutrient-rich soil, had some kind of responsibility to sit back and accept. And to be clear, many of the European refugees who would have trekked across Sörgel’s newly reclaimed land were genuinely in need. They were impoverished, homeless, destitute. And a lot of them were fleeing political violence. Those folks were as poor, wretched, and persecuted as any Honduran is today. But in fully rejecting Atlantropa as a goal to be pursued, the international community took the position that “it sucks that you’re impoverished and mistreated in your home country, but it ain’t Africa’s problem. Stay where you are.”

See, in those days, the elites believed in keeping people in their own damn land. Hard as that might be to fathom now, that used to be a mantra of the progressive internationalists. There was a die-hard belief that the key to world peace was the separation of people, the segregation of populations by race, religion, and ethnicity. That was the entire point of the Greek/Turkish population exchange of 1923, overseen by the League in the name of keeping Greek Christians and Turkish Muslims separated for the sake of peace. As UNC Chapel Hill history professor Sarah Shields wrote in her 2016 essay in the Journal of the History of International Law, the prevailing belief at that time was that “Muslims and non-Muslims could not live together peacefully, and modernity required rejecting a diverse past in favor of a nation-state along European (unmixed) lines.”

Separation was the future, diversity was the past. Damn near 1.6 million Greeks and Turks were sent from the land of their birth to the land where they could live with those of a similar faith. Many of the other population transfers and redrawn boundaries that followed World War I were based on that same concept of giving people their “own” homeland based on characteristics like religion or ethnicity. It was simply taken as fact back then that nations function better with some level of homogeneity. That was canon back then. By the time the U.N. came around, that notion was still very much a guiding principle, as the internationalists realized that a vision of a multireligious, multiethnic Palestine was unrealistic and unattainable. And the Jews and the Arabs realized that too, which is why they started slaughtering each other, because they couldn’t bear to live in a partitioned state. Being separate but equal was not enough. They wanted to be separate and separated.

But here we are now, with globalists mandating that Western nations accept millions of third world refugees. And you know what? That alone would not be quite as objectionable if the scheme were presented honestly. But it isn’t. We’re being told that an invasion is not an invasion. We’re told that the swarm of refugees will strengthen the West, not weaken or destroy it. Because hey—no matter if everything you like about your nation is being slowly dismantled, no matter if your nice little prosperous, high-standard-of-living, low-crime, long-life-span country is becoming a fetid third world cesspool, at least you have better restaurants. My God, consider the restaurants. That’s the new leftist mantra, replacing the one that was so popular in the 1990s: “Will somebody think of the children?!” Now it’s “Won’t anybody think of the restaurants?!”

It makes me wonder, back when Belgians began streaming into the Congo (not exactly with the best of intentions), if one African native ever said to another, “Hey, don’t be so xenophobic, bro. Have you tried their moules-frites? Totally worth the risk of mass immigration. ’Cuz it’s all about the cuisine, man.”

What we’re witnessing today is one mad dream having been replaced by another. The 1920s League of Nations mind-set—compulsively drawing and redrawing national boundaries to keep people “in their place,” forcibly transferring millions of people from the land they were born to the land where they “belong”—was a mania, and one that caused a great deal of suffering. But the inherent principle behind it, that countries function better if they can retain a national identity, was not in and of itself wrongheaded or destructive. And now, leftists have flipped the script. Now the dominant mind-set is, we all have to mix. Homogeneity is a recipe for disaster (don’t mention Japan…don’t mention Japan…I’m not listening…la la la la), and the guiding principle is that the West must be made as diverse as possible. Homogeneity is now the enemy, and the social engineering once used to enforce it is now being used to dismantle it. Whereas a hundred years ago we were told by the enlightened internationalists that nations function better if united by a common race, ethnicity, or religion, we’re now told, “Naw, forget that nonsense. Diversity is our strength!”

Back then, a caravan of poor, starving, persecuted Europeans marching from Europe to Africa across Herman Sörgel’s drained Mediterranean would have rightly been called an invasion, a colonization. Today, similar caravans coming from Africa to Europe, or from Central America to the U.S., are called vessels of much-needed diversity. Because to leftist intellectuals, it’s all about power. Whether they’re forcibly separating us or forcibly mixing us, they get their pleasure from the force part. That’s what matters to them.

But take heart, America, and remember—among the thousands of Honduran caravan refugees currently marching toward our border, at least one or two of them are probably really good cooks. So get ready for some damn fine baleadas! Whatever else this modern-day realization of Herman Sörgel’s crazy dream brings, you can at the very least count on a few new and exciting menu options at your local restaurante.

So open wide and swallow. And bon appétit.