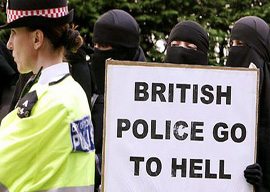 The most surprising news story in recent weeks was that of Emma West, a young lady of the type sneeringly referred to as “chav” (white working class, not fully trained in multicultural etiquette) who fearlessly shouted her opinions to a tram-loaded slice of multicultural London.

The incident itself was not so remarkable. But the fact that this clip, filmed and YouTubed by a non-chav (a blonde who uses a black avatar on her Twitter account) went on to score millions of hits was remarkable indeed.

Equally noteworthy was the heavy-handed way the authorities dealt with the case: West was imprisoned and her children taken into care.

A few days later a gang of female Somali racists who were filmed stamping on a white girl’s head while shouting “Kill the white slag” were released with a tut-tut and a judge’s apology for allowing alcohol to exist in the UK’s remaining non-Sharia zones.

“Women start revolutions because they are more emotionally driven than males.”

Emma West gave us a fleeting glimpse of women’s revolutionary power, a force that should never be underestimated and something of which Britain’s multicultural dictatorship seems cognizant. It was stupid of them to allow the Somali head-stomping racists off so lightly in the wake of the West case, but that gang attack was not revolutionary in nature and comprised no danger to the establishment. But Ms. West’s verbal tirade, despite its grammatical failings, was both revolutionary and dangerous.

Raw female passion has always provided the necessary impetus in past revolutions. The Women’s March on Versailles in 1789 ushered in the French Revolution’s truly revolutionary—as opposed to reformist—period.

Feminist accounts of the Russian Revolution tend to focus on the few educated women who made tea for the creeps who later presided over the genocide of tens of millions of Russians. But in the actual overthrow of Tsarist power it was the common women in the street fearlessly facing up to the Tsarist troops’ bayonets who tipped the balance.

Women start revolutions because they are more emotionally driven than males. And as the weaker sex, they learn to verbally bully men into submission because most of them are in relationships (i.e., prolonged arguments punctuated by bouts of shagging) with creatures that could easily snap their necks like chickens.