When Dads Breastfeed Their Kids 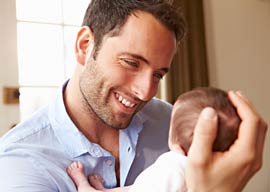 During Trevor’s tireless activism, Trevor has run across hatred and discrimination and thought-abuse and feelings-rape at the hands of biological women who still identify as women, because these narrow-minded gender-essentialist harpies express such discredited and phobic sentiments as the idea that Trevor isn’t really a man”and, hey, even if Trevor is really a man, well, as women they don’t feel comfortable breastfeeding in the presence of a hairy Neanderthal chestfeeder.

Huffington Post, that digital safe space for menopausal liberals in the early stages of Alzheimer’s, ran an article a few weeks ago titled “The Troubling Erasure of Trans Parents Who Breastfeed.” Without a hint of a wink, the article states that the notion that “gender is tied to biology” is an “antiquated belief.” The article quotes someone calling themselves Jasper Moon, described as “a genderqueer parent who prefers to be called ‘ren’ by their child (short for ‘parent’). The article also burps up this little golden nugget:

The term “mother” is itself problematic.

What’s also problematic”as well as unacceptable and personally offensive to me”is the fact that the entire animal kingdom suffers from transphobia. Everywhere you look for animals”from forests to deserts, jungles to mountains”anatomical females are the ones who selfishly flex their imaginary gender privilege by asserting the sole right to nurse their young. Hatred and ignorance and bigotry”not to mention personal feelings of low self-esteem, inadequacy, and seasonal depression”lead many cisgender females of the animal kingdom to falsely propagate the gender binary in order to monopolize government resources and garner more “Likes” on Facebook. This serves to marginalize and oppress your average female-to-male penguin who simply wants to nurse his baby penguin on the polar ice cap alongside female penguins without feeling excluded, maligned, or microaggressed upon.

It reaches the point where I wonder whether such people are just fucking with me or if they’re truly caught in the web of non-reality. I’d much rather this all be an elaborate joke. The alternative is too terrifying to ponder.

But whatever way the milk flows, my New Year’s resolution is to swear off dairy products for the rest of my life.