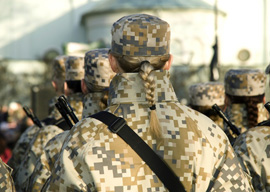 Two female soldiers are suing the US military for “violating the rights of servicewomen by excluding them from certain military positions and from ground combat units because of their gender.”

In wars past, it has been men fighting and men dying. Female nurses and medics have been killed, but it is mainly men who have sacrificed their lives.

Women have never been drafted. I have argued with some who say: “Women should be treated exactly equal to men in the military.”

“Well, then women should have a choice if they want to go or not,” they respond, unaware of any logical contradiction.

Perhaps it is now anachronistic to regard the military as an institution where machismo is encouraged and rewarded. Was it not the last of such an institution? In corporate America or in the classroom, a male perspective and a macho attitude seem to have been punished, and even criminalized, through a variety of cultural changes and sexual-harassment laws. Can”t we have one last place where boys can be boys?

“Can”t we have one last place where boys can be boys?”

After the repeal of Don”t Ask, Don”t Tell and now what seems the inevitable inclusion of women in combat forces, the answer appears to be no.

It is sad to see the romantic, Hemingwayesque vision of war pass and to enter an era where the military is seen as simply another career field where potentially frivolous lawsuits cause management to be defensive and cautious. This must surely put a damper on the thrill of battle.

Military acquaintances have told me that boot camp has become less confrontational. During boot camp, drill sergeants used to provoke new soldiers by questioning their masculinity, calling them a “Nancy” or a “sissy.” Since gays are now allowed in the military, that would seem to be off-bounds and the drill sergeants would be guilty of hate speech.

If being male is not required for combat positions, questioning a soldier’s masculinity becomes irrelevant, though this was a good method of encouraging and reinforcing such manly virtues as bravery and stoicism. Rather, being a soldier will now become a kind of technocratic career where one must be as politically correct and sensitive as in any other miserable line of work.