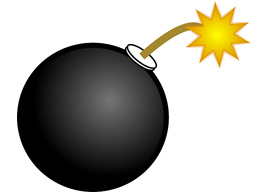 After being jilted last summer by a white girl he’s named recently in tweets as Francesca Rossi, Thompson allegedly kept his harassment mostly confined to her and various associates he perceived as traitors and enemies. He didn”t “up his game” and start threatening Jewish centers until January.

In a rambling screenshot he posted on Twitter, he accused his ex of trying to frame him for the bomb threats:

Two years ago, after swearing off white women, I started dating one….She seemed like a cool Brooklyn white radical. There were warning signs though; she didn”t tell me she had herpes until AFTER we hooked up; she called me a thug, in an approving way…she called herself captain save-a-thug”a reference to the type of black men she dated.

We broke up after someone showed me the light, and since then she’s stalked and harassed me….She, though I can”t prove it, even sent a bomb threat in my name to a Jewish center, which was odd given her anti-Semitic statements….I got a visit from the FBI. So now I”m battling the racist FBI and this vile, evil, racist white woman….I”m afraid…we know what happens when white women use the law to go after black men.”

It’s a unique approach, I”ll give him that”try to frame your ex by sending a bomb threat in your own name, but claim that she did it. It’s a brilliant plan that might have worked if FBI agents weren”t able to trace the threats to Thompson’s IP address.

While these bomb threats were being made, Thompson continued blaming his ex for trying to frame him, referring to her as “some awful white woman” and “a white nasty white woman””that’s right, he said “white” twice!

Writer Doyle Murphy for the St. Louis Riverfront Times says Thompson once called him “a white piece of shit who lies and distorts to fit a narrative.” This is rich coming from someone who claimed over the past couple years to be dying not only from multiple gunshot wounds but from testicular cancer”neither of which turned out to be true. Murphy then goes on to chronicle several of Thompson’s lies, including little dumb ones about how his “homemade kimchi” he posted online was actually a stock photo and how his “tattoo” of Malcolm X from an alleged trip to Cuba was merely swiped from another online photo. He also documents how Thompson allegedly created a Twitter account to smear Murphy as a rapist after failing to get him fired from his job.

When I hear of a disgraced black communist trying to frame his white liberal ex-girlfriend for anti-Semitic bomb threats, am I the only one who thinks “Oscar contender”? If Hollywood doesn”t immediately make this into a blockbuster, it’s only because they”re prejudiced against young black reporters who hate Donald Trump, white women, and Jews. In case Juan Thompson didn”t get the memo, you”re only allowed to hate Trump.