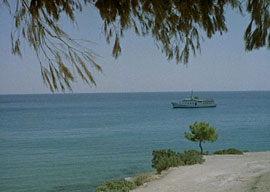 War was central in our lives. We remembered World War II only too well and waited in vain for news from Fraulein, who had brought us up and had left as the Greek Civil War raged to return to Dresden. When the Korean War began, children would fire imaginary machine guns in the woods and dive-bomb with ear-damaging howls into the arc of heroic death. Poor kids had wooden Tommy Guns, and we”d laugh at them because we were grown-ups. Wartime values, however, were still very strong. Respectability, conformity, restraint, and trust underpinned the 1950s. Children as young as eight, especially in Athens, would walk to school by themselves”no one would think of bothering them. Bicycles were left against walls unchained at bus stops or at railway stations.

Parents were remote figures, especially one’s father, who was either away at war or in his office. But come summertime things changed. Father would take us boating, play soccer with us, and once, in Greenwich, he even tried to play a game that was strange to him”he called it palouki, which means a large piece of wood. We called it baseball. (He didn”t do so good, as they”d say in Brooklyn.)

No respectable girl bared her breasts on the beach, except in the south of France. Even as far back as the summer of 1952, a fifteen-year-old boy could sit on the railings in Cannes and look at bare-breasted women to his”well, let’s call it heart’s content. At night, young prostitutes would tease boys at the Croisette, asking if they had ever been with a woman or not. “Come on, I”ll show you; how much change have you got on you?”

And then, on the way back to jail, I had a reprieve when I met Olga on the Constitution returning to New York. We had six secret days and nights together, swore eternal love and planned marriage, and once I was off the boat and on my way back to school, I never saw or spoke to her again.