When Your “Leaders” Are Leading You off a Cliff 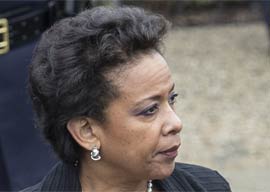 Huge swaths of the populace have been psychologically terrorized into what is effectively suicidal masochism.

We live in a world where it is unacceptable to notice patterns and therefore to “profile” groups that are openly hostile to the majority, while it is de rigueur for the majority to self-profile and confess that they were born with blood on their hands merely due to their skin color. It’s a world where the powers that be aren”t here to protect you, but to extort you. To persecute you. To silence you and to threaten to jail you if you dare utter a peep of protest.

Lynch also told the dinner crowd of Muslim Advocates that “actions predicated on violent talk are not America. They are not who we are. They”re not what we do, and they will be prosecuted, so I want that message to be clear also.”

Who is this “we” of which she speaks? Why do I get the feeling that I wasn’t invited to that party? Why am I supposed to tolerate everything except my instinct for self-preservation?

I have a friend who owns a house located a mere mile from what has allegedly become the “worst neighborhood in America,” mainly because the UN has deigned it right and proper to infuse the area with Somali Muslim “refugees.” He had no choice in the matter, just as Europeans had no say in the continent’s ongoing mass invasion by Middle Eastern and Northern African Muslims. But the moment my friend dares to express the merest concern about his physical safety or his declining property values, he is shouted down as a “racist””most often by clueless whites who are afflicted with a nasty case of Passover Syndrome.

The ones you should fear most are those who try to dictate what it’s acceptable for you to fear.

Let’s hire a bomb squad to defuse the word “racist,” because it is the primary weapon being wielded to club the white majority into abject, ankle-grabbing submission. Once that word has been divested of its power, the rest is mere cleanup work.