Whites Have No Place in Africa 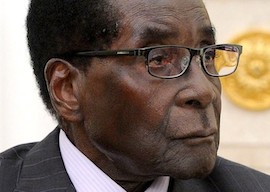 On 11 December the South African Constitutional Court delivered a scathing judgment against former president Jacob Zuma’s decision in 2014 to support a Mugabe-initiated pseudo-legal maneuver to block a South African Development Community (SADC) tribunal ruling. This court had been constituted at the time of the formation of SADC and was designed to arbitrate disputes within the member states. The founding fathers of the community were explicit in the prohibition of any action taken against any person or entity motivated by race. This worked until Mugabe forcefully evicted 4,000 white farmers on the grounds of their skin color. When Zimbabwean courts were found wanting, the farmers took their case to the SADC tribunal and won. Suddenly a deified “freedom fighter” was conclusively proved to be a vicious and destructive racist, that his actions were illegal, and (all credit to the brave judges) his government was instructed to compensate the dispossessed. This was too much for Mugabe and his regional acolytes, so they simply closed the court and annulled the ruling.

Just what this new judgment means is far from certain, but it appears to clear the way for new claims.

Unsurprisingly this landmark ruling in favor of the farmers has attracted little or no media attention. We need no reminding that this is because the complainants are white and whites have no place in Africa. Much easier to simply presume they brought this on themselves for being rapacious racists and leave it at that. But the facts reveal this is far from the truth. When those farmers were put to the sword they reluctantly took with them hundreds of thousands of employees and their dependents. In fact it took down an entire economy, which imploded and generated a refugee stream into neighboring countries and abroad that has run into millions of people. All of them, technically, have a claim for damages. The capriciousness of one man and his minions may have given rise to one of the most colossal civil claims in legal history, with a potential quantum that is well-nigh incalculable.

Some of my compatriots are excited at the prospect of compensation. Much as I hope they are right, I fear the worst. They will get nothing. It’s an old game that whites never win.

“Everywhere I have been I have been starkly exposed to grim reminders that the ‘liberation’ of Africa is synonymous with destruction.”

My thoughts are based on what I’ve seen in a lifetime working in and wandering around southern and eastern Africa. Everywhere I have been I have been starkly exposed to grim reminders that the “liberation” of Africa is synonymous with destruction. I have seen farms, factories, homes, beautiful buildings, and entire infrastructures rendered derelict through willful neglect and wanton destruction. Pristine towns and suburbs turned into ugly slums.Nothing forcibly bequeathed by our ancestors has been maintained, appreciated, or improved upon, and nobody has been compensated for the damage done.

In the same vein, looking back on the farm seizures in Zimbabwe, I am not sure if the actual purge was the worst part or the aftermath; the former was terrible and often terrifying, but then watching what was built so painstakingly and diligently over, in some cases, almost a hundred years, being plundered, broken, and rendered fallow and lifeless, is probably the unkindest cut of all. If the undeserving recipients of these farms had taken these magnificent properties and treasured them and maintained their luster, my anger might have been somewhat assuaged. This is the ongoing tragedy that enters, probably, its final chapter in South Africa today.

Unquestionably the most sophisticated and industrialized country on the continent, the work done by legions of migratory Europeans over centuries is rapidly being undone. Virtually all organs of state are corrupt and dysfunctional, all the country’s once-prosperous parastatals are bankrupt, water and power utilities are collapsing, a rail system that until recently provided efficient and cost-effective connectivity is crumbling. Against this background the proposed eviction of white farmers will usher in another continental catastrophe.

Lost to history, thanks in large part to the liberal fascists who control our media and teach our history, is the fact that over centuries, many thousands of hardworking, well-intentioned men and women from Belgium, Britain, Germany, Portugal, Holland, France, and elsewhere left their homelands and risked everything in remote and hostile territories to forge new futures and build new countries. They did not come to loot and murder as our children are taught, they came to construct and contribute, and they expended massive amounts of blood, sweat, and capital. Then the tectonic political plates shifted and in the blink of an eye they went from being celebrated servants in the Christian quest to spread civilization and modernity, to racist opportunists sucking the commercial blood out of innocent natives whose tropical paradise had recently been wrecked by their rude arrival and subsequent residence.

We are not really allowed to read Rudyard Kipling in these politically correct days, but his poetry remains powerful and prescient: