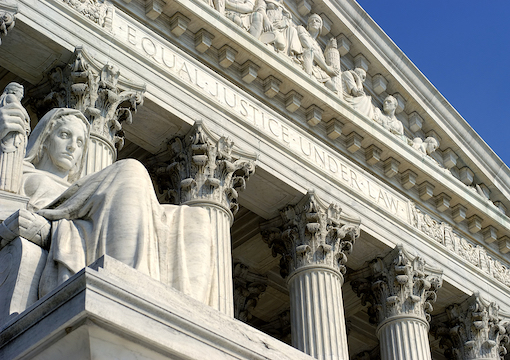 The Supreme Court of the United States finally handed down its decision in Dobbs v. Jackson Women’s Health Organization, the landmark abortion case. The court ruled that the Constitution does not provide a right to an abortion, thus overturning Roe v. Wade and the logic behind the decision. Clarence Thomas suggested that this will lead to the overturning of other cases reliant on such imaginative jurisprudence.

The usual suspects are out in the streets setting fires and smashing windows demanding something. Whenever the far-left crazies do not get 100 percent of what they want, they take to the streets and start smashing things. This is how their corporate handlers let them blow off steam. Those corporate handlers were quick to let them know that HR will be there for them once they are done with the tantrums.

Right there is one of those mileposts that reveal just how much America has changed in the past fifty years. Abortion used to be an issue fought between white lesbians and Christian mothers. The former argued that abortion was a feminist sacrament that magically made women on par with men. The latter argued that it was just another step in stripping women of the natural respect they command in a just society.

“If a society has the right people in charge, people with a natural attachment to society, they will make decisions in the public interest.”

There are plenty of hefty lesbians in the crowd at these mini riots, but for the most part abortion is a corporate-sponsored cause. Feminism is too busy trying to figure out if men can have abortions. In fact, they are stuck on whether such a thing as men and women exists, since there are so few biologists in their ranks. Like everything else about the left, abortion politics is a postmodernist joke.

Interestingly, the other side of the issue has been subdued in response to what is their one and only victory in the culture war. Many of the people who made social conservatism a force on the right have been dead for a generation. Others simply got tired of waiting and moved on to other issues. Fifty years is a long time to wait for the conservative movement to deliver on a promise.

Conservative Inc. is also struggling with this one. Their whole model is based on losing gracefully, so they are unprepared for an actual victory. Crisis counselors have been called to American Enterprise and Heritage to help the staff cope with something they were told could never happen. For professional conservatives, Dobbs is like seeing Big Foot riding a unicorn. They are questioning their sanity.

What makes this even more difficult for Conservative Inc. is the fact that Dobbs was made possible by their archnemesis, Donald Trump. In his debate with Hillary Clinton, Trump made clear that abortion would be a litmus test issue for him when it came time to select judges for the court. His matter-of-fact explanation for how he would roll back Roe was mocked at the time, but it turned out to be correct.

Ben Shapiro attacked Trump and Trump supporters for thinking that it was possible to stack the court with judges who would follow through on their claims. Shapiro was sure that Trump was not only lying, but too stupid to understand how the court worked and how the nomination process worked. He also claimed that Trump lacked the stones to stand up to the left when it came to judges.

Unsurprisingly, Shapiro was wrong on all counts. This will have no impact on his status within the conservative echo chamber, as being wrong is universal. One of the many reasons conservatism is nothing more than a legacy grift right now is that no one in the movement ever paid a price for being wrong. Instead, being wrong turned into a weird status symbol that elevated the stupid over the intelligent.

Of course, this should inform the ongoing debate about the future of conservatism that is happening in various quarters. Many have argued that appointing originalist judges would not result in conservative ends. Chief among them is the Harvard academic Adrian Vermeule, who claimed that the court would never take up Dobbs, and even if they did, they would never overturn Roe.

Although they probably do not see it, the Dobbs decision cuts the legs out from under the New Right just as it does Conservative Inc. Both sides of this debate claim that how things are done is what matters. In reality, it is who, not how. Who decides is what matters in the law and in social policy. If a society has the right people in charge, people with a natural attachment to society, they will make decisions in the public interest.

This is why the most unhinged opposition to Trump came from the neocons. They have always been the brains of Conservative Inc., and they correctly saw what the Trump phenomenon represented to them. Trump was not running to promote a process but on the promise that he and he alone could make the required changes. His campaign was an explicit appeal to the who rather than the how.

In the end, Dobbs will not change much about abortion in America. The states will arrive at policies that match their inclinations. In other words, the issue will quickly fold into the normal process of government. That was always the right answer, but the people promoting abortion opposed this because it made it impossible for them to impose their morality on the rest of society. Again, who versus how.

The real impact of Dobbs is in reminding the white remnant that what matters is who decides, not how they decide. For generations they have been told by their betters that process is their greatest virtue. It took a billionaire bumpkin from beyond the pale to prove that process is a tool. In the hands of good men, it results in good ends. In the hands of alien rulers, the best process leads to bad ends.